Revenue for Q1 2016 was $2,530 million, slightly lower than $2,604 million in Q1 2015 or a 2.8 percent fall. The numbers benefited from an exceptional gain on the sale of the group’s investment in LCH.Clearnet Group Limited.

One of the key drivers of the group’s revenue during the quarter was subdued activity on the Cash Market in Hong Kong and Commodities Market in the United Kingdom (UK). These returned to levels similar to Q4 2015 which were 16 percent and 9 percent respectively below Q1 2015.

In addition, significantly increased trading of derivatives contracts on the Hong Kong Futures Exchange Limited, at levels that were higher than both the previous quarter and Q1 2015 positively impacted on revenue.

Operating expenses for Q1 2016 were $854 million, reflecting an increase of 19 percent against $718 million in Q1 2015. The increase primarily reflected the cost of additional headcount and higher legal and professional fees incurred to support strategic initiatives in Q1 2016. The comparison of operating expenses with the previous year is distorted by a one-off recovery of $77 million from the liquidators of Lehman Brothers Securities Asia Limited (Lehman) which reduced the Q1 2015 operating expenses.

Profit attributable to shareholders decreased by 9 percent to $1,432 million in line with EBITDA. 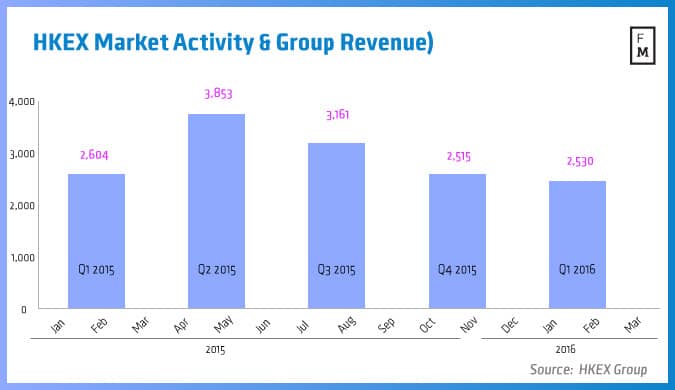 The board of directors has commented that despite the difficult conditions experienced in the various markets in which the group operates, overall revenue and other income has held up comparatively well, being broadly in line with Q1 2015.

In response to continued uncertainty in market conditions the group is adopting a prudent approach to expenditure control as it moves into Q2 2016. While it continues to move forward with strategic initiatives, a more cautious approach is being taken to the timing of less critical projects as a means to manage capital expenditure while facilitating a more modest increase in headcount during 2016.

Share this article
Tags: financial-results / hkex
Got a news tip? Let Us Know