Eurex Group has just released its volumes across its exchange for the month ending July 2016 – the group’s average daily volumes (ADV) fell to their lowest level in over a year, easily erasing any gains seen last month, according to a Eurex statement.

During July 2016, Eurex reported an ADV of just 5.5 million contracts, which corresponded to a sizable drop in volumes over a monthly basis. On an adjusted basis, June 2016 was propped up by volatility seen from the Brexit referendum. Given the unexpected fallout and decision, virtually every institutional trading venue in the industry experienced some degree of uptick, after what has amounted to a lackluster 2016 calendar year thus far.

However, July 2016 at Eurex represented a new low, erasing all of last month’s standout gains in this area, which represented a decline of -41.5% MoM from 9.4 million contracts in June 2016, its lowest figure thus far in 2016. Looking at a yearly snapshot, July 2016’s ADV at Eurex also was lower over a YoY basis, albeit by a more muted figure of -6.8% YoY from just 5.9 million contracts in July 2015. 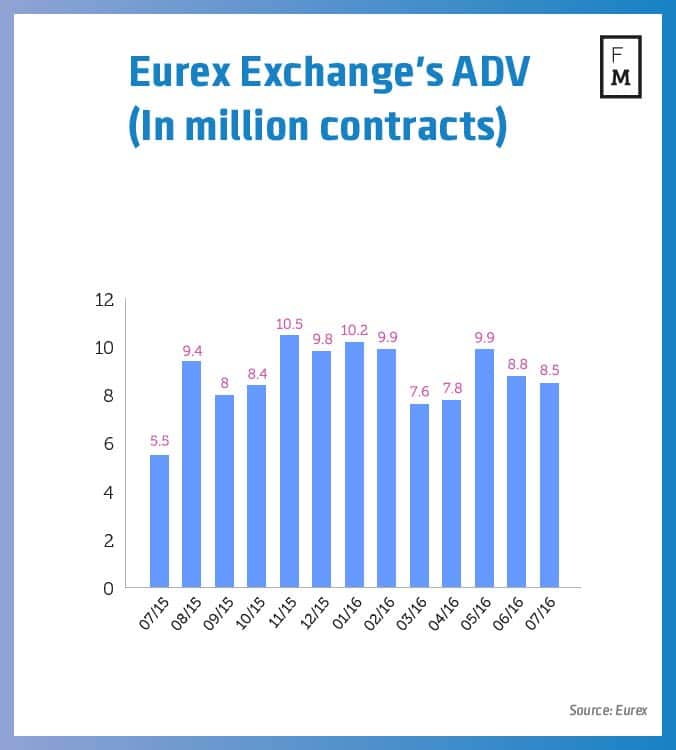 Eurex’s offering of equity index derivatives (combining both equity options and single stock futures) was also characterized by a sharp decline in July 2016, crashing to just 59.0 million contracts in the month, vs. 114.2 million contracts in June 2016, or -48.3% MoM. Compared with July 2015, the latest figures also orchestrated a fall of -17.6% YoY from 71.6 million contracts.

Share this article
Tags: Eurex / volumes
Got a news tip? Let Us Know