Eurex Group has released its latest tranche of volumes for the month ending April 2016, which again returned to a diminishing trajectory that saw its ADV fall MoM, according to a Eurex statement.

In April 2016, Eurex saw an average-daily-volume (ADV) of just 8.4 million contracts, which represented a sizable retreat off of a previous yearly high and March figure of 10.5 million contracts. This constituted a fall of -20.0% MoM, though edging higher steadily from 8.3 million contracts per day in April 2015 or 1.2% higher YoY.

Eurex’s leading installment of equity index derivatives (combining both equity options and single stock futures) also yielded a much lower volume during the month of April 2016, having fallen to 62.7 million contracts, down -32.2% MoM from 92.5 million contracts in March 2016 – over a yearly timeframe, this figure did illustrate a sizable jump of 20.6% YoY from 52.0 million contracts in April 2015.

In terms of its interest rate derivatives segment, Eurex also showed a forgettable performance across its volumes during April 2016. Despite securing a sizable growth last month, Eurex’s interest rate derivatives crumbled to just 35.0 million contracts for the month, easily erasing last month’s gain and justifying a MoM decrease of 35.1% MoM from 53.9 million contracts in March 2016. As was the case across the rest of its business, despite the waning figures relegated to a MoM snapshot, the latest derivatives volumes did manage to best its 2015 counterpart by a factor of 10.8% YoY from 31.6 million in March 2015. 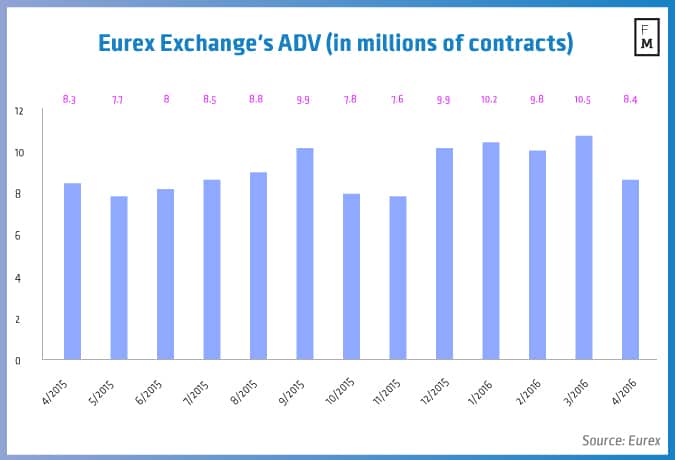 Share this article
Tags: Eurex / volumes
Got a news tip? Let Us Know