ICAP has reported its trading volumes on its electronic foreign exchange (FX) platform EBS for March 2016, which for the second consecutive month marks a declining figure and by far its lowest performance of 2016 thus far, according to an ICAP statement.

More specifically, EBS’ FX volumes totaled just $83.7 billion daily in March 2016, constituting a decline of -18.4% MoM from $102.6 billion in February 2016 – the latest figures also shattered what had been a relatively narrow range of consolidation across EBS’s volumes over the past three months, which has now fallen below a $100.0 billion threshold.

Expanding the scope to encompass a yearly timeframe however, EBS’s March 2016 volumes of $83.7 billion are also lower by a factor of -26.9% YoY from $114.5 billion in March 2015. This decline in March has been shared by both institutional and retail venues as a whole and has thus far not been specific to any one brokerage or exchange. It will be worth noting if this trend is snapped heading into Q2 2016 as volumes are by and large at their YTD lows, as is certainly the case at EBS.

Looking at ICAP’s US Treasury activity during March 2016 was a large similar narrative, given an abrupt decline in average daily volumes, albeit only 1.0%. During March 2016, US Treasury activity volumes came in at $155.3 billion, falling precipitously from $208.0 billion just one month ago, or -25.3% MoM. In terms of a yearly figure, March’s volumes did orchestrate a tepid 1.0% advance from $153.9 billion in March 2015. 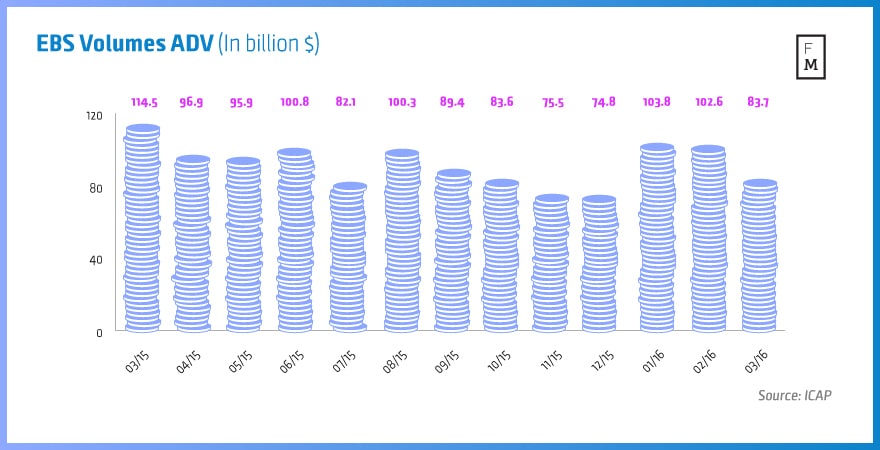