The CLS is a key nexus of the FX industry, which is owned by some of the world’s leading financial institutions – the group is responsible for settling payments across 17 different currencies.

The CLS Group reported previously swelling monthly figures in August, which noted a double-digit rise (11.9%) from July. September 2014’s figures proved that August was no fluke, following a MoM growth of 37% from 1,035,978 in August 2014. 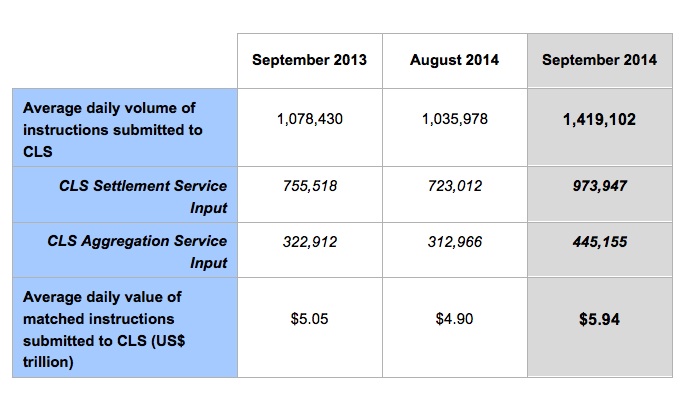 According to David Puth, CEO of CLS in a recent statement on the September metrics, “we have seen a significant increase in trading activity this month. September’s average daily value of USD5.94 trillion is up by a fifth from August 2014, and is the highest in CLS’s 12-year history.”

“CLS also achieved another record last month, settling over two million FX instructions in one day for the first time in its history – worth in excess of USD10 trillion. 99% of these instructions were settled in just 45 minutes, which is a testament to the robustness of CLS’s recent technology upgrades,” Puth added.

Finally, “despite the low volatility environment in the FX market for much of 2014, values settled in CLS have remained stable with an average daily settlement value for the year to date of over USD5 trillion.”