In its quarterly report, the bank said: “Given the increased burden in relation with the ECB’s further interest rate cut in March and the highly volatile global capital markets, it has become more ambitious to reach the consolidated profit 2015,” echoing remarks made last month by former Commerzbank Chief Executive, Martin Blessing. 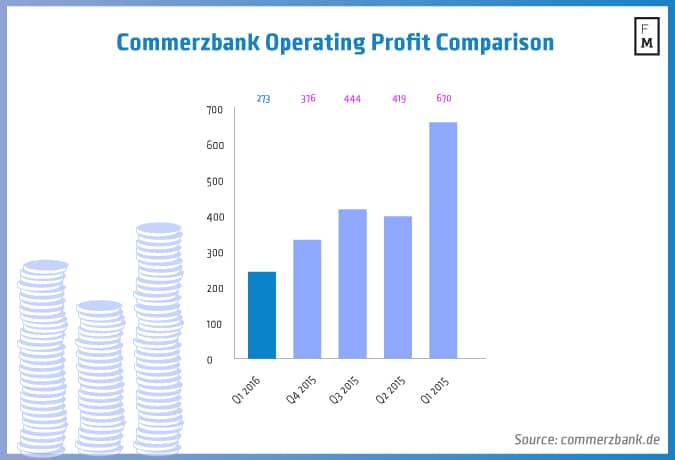 Commenting on the results, Stephan Engels, Chief Financial Officer of Commerzbank said: “In view of difficult market conditions and the increasingly challenging interest rate environment, the Bank achieved a reasonable operating profit in the first quarter. The Bank’s risk profile is good and with its CET 1 capital ratio at 12.0 per cent, it continues to hold a solid mid-range position among European peers.”

It also emerged today that Commerzbank was one of the main culprits in a widely used tax-evasion scheme that has cost Germany EUR 5 billion ($5.78 billion) in taxes since 2011.

The German banks would receive the dividend payments and incur the taxes, but offset them, for example, with losses carried forward, effectively paying no taxes and benefiting by deducting a fee from the foreign investor before passing on the dividend.

Share this article
Tags: commerzbank / earnings
Got a news tip? Let Us Know