Barclays (LON: BARC) reported attributable net profit of £2.94 billion for the first nine months of 2015, on revenues, excluding insurance claims, of £19.09 billion ($29.13 bln). The net result represents a 14 per cent improvement on the year, from £2.59 billion for January-September 2014. Revenues for the prior year were £19.71 billion, 3 per cent higher that this year’s result.

Although overall most of the financial performance indicators were down, in the core business divisions the British lender reported robust results. Revenues from core business totaled £19.04 billion, up 2 per cent from £18.68 billion a year earlier, and attributable profit jumped 14 per cent to £3.67 billion, from £3.23 billion for January-September 2014.

Return on average tangible equity in the core business divisions was double-digit, at 12.7 per cent, virtually unchanged from the 12.8 per cent for January-September 2014. In the non-core divisions, return on equity was a negative 4.4 per cent, down from 5.4 per cent for the same period last year.

return on equity benefited from the performance of the core business

Overall, return on equity benefited from the performance of the core business, standing at 8.3 per cent, versus 7.4 per cent for the nine months of 2014. Barclays’ cost to income ration totaled 65 per cent in the reporting period, down from 67 per cent a year ago. 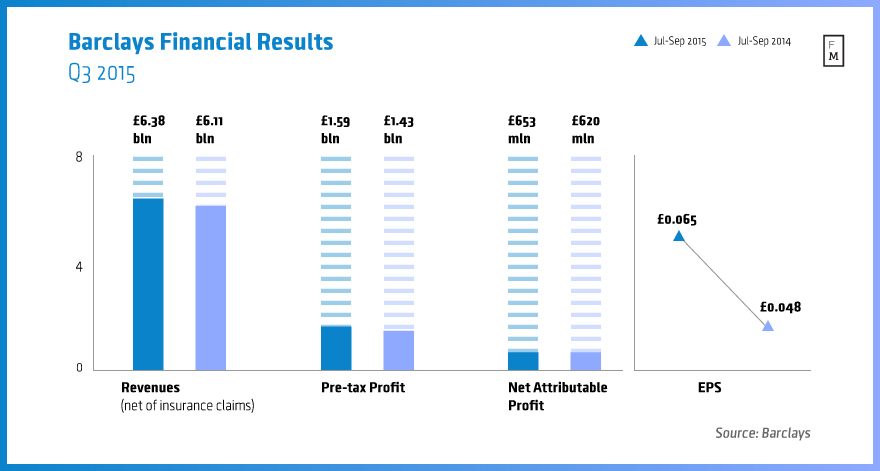 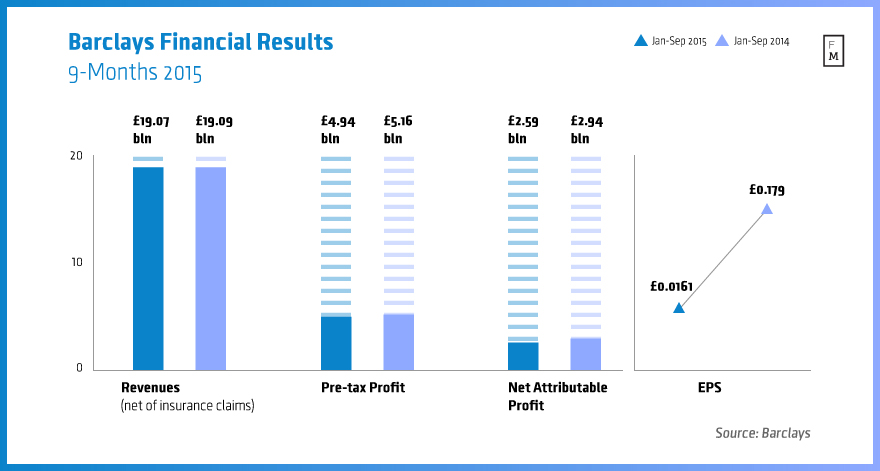 Barclays said in its financial statement that the decline in adjusted revenues was due to the  shrinking of non-core revenues, adding that the slide was partially compensated for by the rise in core business revenues, noting in particular Barclaycard and its investment banking arm.

The performance of the non-core businesses reflected some asset sales, such as Barclays’ Spanish and UAE divisions, as well as rundown on assets and securities. Still, the asset sales and some other cost-cutting measures contributed to curbing the effects of the adverse events.

The same trend, of core businesses doing well and non-core divisions registering declines, was also observable in the company’s third-quarter results. Adjusted revenues stood at £6.11 billion, down from £6.38 billion for the third quarter of 2014, and attributable profits totaled £653 million, up from £620 million.

In its statement, the bank also added that total assets as of end-September stood at £1.237 billion, up 3 per cent on the quarter, and leverage exposure remained unchanged at £1.141 billion. The leverage ration, however, rose to 4.2 per cent from 4.1 per cent because of an increase in Tier 1 capital.

Barclays, which has been hit with over $2 billion in fines and settlement charges related to its participation in the Libor rate-rigging scandal that swept the banking world in 2011, has also been shaken by senior management moves. Earlier this week the bank announced the appointment of Jes Staley, a J. P. Morgan vet, as Chief Executive Officer.

Share this article
Tags: Barclays
Got a news tip? Let Us Know