Early days of 2016 seem to be echoing those of last year, and with further negative data coming out of China there could still be plenty of pain in commodities, particularly in the energy and metals complexes.

The statistics are ugly: the benchmark index S&P GSCI ended 2015 with the first three-year consecutive loss in its history, a total of 55.6%; in December, the S&P GSCI Total Return recorded a new maximum drawdown of 80.5% from its peak in July 2008 and posted its fourth biggest annual loss in history since 1970 at 32.9%.

This is the first down cycle where demand has collapsed but production hasn’t collapsed.

“2015 will go down in history as one of the worst years ever for commodities,” wrote Jodie Gunzberg, Global Head of Commodities at S&P Dow Jones Indices in a media alert.

People in the commodities industry are often hard to rattle, with an attitude that: “the cure for low prices is low prices”. But this time might be different, said Robin Bhar, Head of Metals Research at Société Générale, speaking to Finance Magnates.

“This is the first down cycle where demand has collapsed but production hasn’t collapsed. In fact, producers have carried on producing because cost base has collapsed,” he said.

That’s because energy costs for producing mines have fallen and currencies have depreciated. Producers in Russia and Brazil, for example, will get significantly higher prices for commodities in the rouble and real respectively – allowing them to just carry on producing rather than shutting down as would have been the case in previous down cycles.

“I don’t think we’ve seen the bottom. If the (US) dollar stays strong because the Fed continues to tighten, as it is likely to, that means strong dollar (and) weak currencies. Therefore, production costs continue to stay low, go even lower and you don’t get the production cuts that are desperately needed in all metals to rebalance the market,” Bhar added.

“Not since the 80s have we seen a year in which so many commodities prices fell at the same time,” she said. The World Bank monitors some 50 commodities, and found more than 80% of them fell in 2015.

The World Bank expects economic growth to pick up, to 2.9% in 2016 from 2.4% in 2015, but this year will be a “test of the resilience of emerging markets and developing countries” Ohnsorge added. 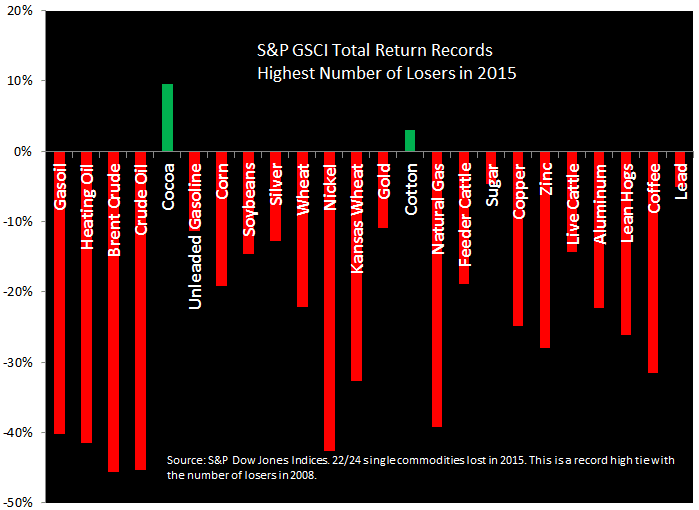 Copper is one of a few commodities in backwardation, meaning the spot price is higher than the forward price. Supply is relatively tight, particularly in comparison with other metals, and inventories at the London Metal Exchange are still close to historical lows.

Société Générale’s Robin Bhar: Copper has been probably the last metal to rebalance from deficit to moderate surplus. China plays the key role because it consumes so much, almost half of the world’s copper, but it produces very little so there’s a natural pull. China considers copper a strategic asset and the red metal is used as a financing tool by companies seeking attractive financing terms.

John Meyer, SP Angel Analyst: Gold appears to be the only metal able to resist the impact of the rebalancing (metals indices adjust their weightings annually) as investors move funds into gold on greater global volatility. George Soros reckons we are back to 2008 in market valuation terms. Gold prices should continue to rise if we are back in 2008 territory, assuming George S. is referring to the post-Lehman part of the year.

Share this article
Tags: commodities
Got a news tip? Let Us Know