The widespread introduction of a commission-free stock trading model in 2019 has completely transformed the retail investment industry in the US and globally, while the 2020 coronavirus pandemic and lockdowns have only exacerbated the phenomenon. However, the apogee of gamification and retail speculation came in early 2021 with the unprecedented situation surrounding publicly-listed gaming retailer, GameStop (GME).

Finance Magnates Intelligence Department looks at the changes that have taken place in the market through the boom in popularity of commission-free trading and how things look after the GME turmoil. We spoke to industry representatives, asking them whether the GameStop speculation has affected their businesses.

In 2020, platforms that enable quick and easy trading from mobile devices broke records in popularity. Robinhood, among others, served more than 13 million users. In comparison, five years earlier, the value was 26 times lower and oscillated around 500 thousand active accounts.

Before Robinhood came out in 2014, anyone who wanted to invest in stocks had to pay between $5 and $10 for a single trade. Additionally, many brokerages were required to have at least $500 to open the most basic account. Robinhood eventually started a significant shift in the market. On one hand, seeing its growing popularity, large brokerages such as E*Trade, Interactive Brokers, TD Ameritrade and Charles Schwab started lowering their trading costs (eventually switching to a commission model). On the other hand, more platforms similar to Robinhood (Public.com, Webull, SoFi, Tradier, TradeZero, Freetrade, BUX and many more) started appearing in the market. 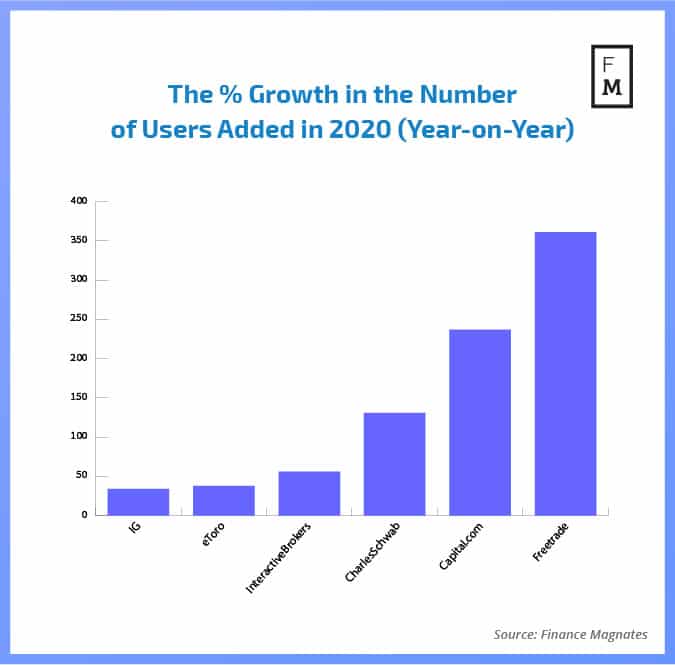 Although the average traditional investor profile worldwide continues unabated (a male with secondary or tertiary education, 40 years old or more), on commission-free platforms, they look different. Younger investors dominate them, and the older ones are just beginning to discover hidden opportunities. “The median age of an eToro investor globally is 34, but we are seeing the proportion of clients over 40 years old increasing year on year, too”, said Gil Shapira, Chief Investment Officer at eToro.

The GameStop frenzy caught the imagination of traders, who began to look for more opportunities for massive retail purchases by attempting to drive up the prices of gold, AMC Entertainment Holdings (AMC), or Dogecoin (DOGE) in a similar way. More people wanted to join the buying mania and the seemingly easy money, which triggered a massive increase in new registrations. As Finance Magnates reported back in January, the GME frenzy prompted a surge in the New York-based online broker-dealers, TradeZero America that had new clients signup more than 200 times compared to the previous year.

“Based on the decision by many brokers to stop opening buys, combined with Dave Portnoy’s calling them to task while also advising that GME and others could be traded with TradeZero, was a powerful one-two punch on Jan 28th, 2021,” said Dan Pipitone, Co-Founder of TradeZero America. “It dramatically increased registrations of new accounts, new deposits and spurred on large increases in trading. Our new account numbers were up over 200.”

According to Yorick Naeff, CEO at BUX, the mania around GameStop “was indeed an event that was lived by the entire market.” During these volatile market moments, the company noticed an increase in new customer inflow, looking for short-term gains. “It, however, didn’t affect our business; the BUX Zero app kept working as it should. We have our own state-of-the-art full-stack system that allows us the flexibility to deal with significant swings of market volatility”, said Mr. Naeff.

To get the full article and the bigger picture on the future of Commission-Free stock trading, get our latest Quarterly Intelligence Report.