Mobile trading has been a pretty talked up trend taking place within the retail online forex space. Not just a factor among a few niche players, but mobile volumes at some of the largest forex brokers have reached over 30% of volumes and greater than 50% client usage rates. The result, like in many other industries, has been a focus on how to develop a mobile first platform experience that utilizes all of the advantages of smartphones and tablets, as well as being optimized for smaller screens. Simply shrinking a desktop or web-based platform simply doesn’t cut it these days.

Less discussed, but another trend that has been forming, is the creation of products with a gaming twang to them. Beyond just binary options, which are often viewed as a cross between gambling and forex trading, the next step are products that provide features synonymous with online games such as multi-player capabilities, achievements, variable rewards as well as defining playing durations.

For a look at the possible future of trading, and a combination of both the gaming and mobile trends, is Flick-a-Trade. 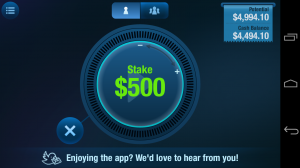 Created by Cygnecode, a London-based design and development firm, Flick-a-Trade is a mobile trading app available for both iOS and Android. The app features charting and real-time pricing of major forex pairs, commodities and equity index products. To play, users enter the duration they want to play; from one minute and up. They then enter the amount of money they want to make available for this round of trading. At this point, the round begins, and players click the asset they want to trade. Included with tradable assets are also an array of ‘fantasy’ products. So if you ever wanted to trade kryptonite, promethium, or galvorn, now is your chance (although I am a little bummed out that there is no adamantium).

When you select an asset, you flick up or down to buy and sell the product; thus the name Flick-a-Trade. Upon making a trade, the current profit/loss is displayed for easy understanding of how well or not the game is going. Players can switch between different assets or continue to trade only one item. Like traditional trading, each product is priced with both a bid and ask price. But, unlike regular trading, Flick-a-Trade offers a multi-player setting allowing for users to play against others to see who the best short-term trader is.

Recently updated for both iOS and Android in its native form, Flick-a-Trade is an investment game app. The future though, according to Cygnecode’s developers, is the roll out of the product as both a gaming and trading app. The company plans partnering with an authorized FCA broker as well as with a regulated UK gaming company. As a trading app, the mobile platform can be connected to a broker’s liquidity and customer accounts.

The Future of Trading Platforms?

Speaking to Kerem Ozelli of Cygnecode, he stated that he didn’t view Flick-a-Trade as competing against the existing market of forex and CFD brokers and platforms like MT4, but a new segment of account type. Explaining this Ozelli stated, “With Flick-a- Trade our goal is to reach out to a whole new breed of market participants – currently a substantially underserved market segment – a new segment which we call the “casual real money gamers”. People that are not attracted to the highly complex FX CFD trading proposition and equally not attracted to the outright gambling offerings in play.”

Even though Flick-a-Trade isn’t positioning itself as a trading alternative, Cygnecode still believes their product brings value to the marketplace for traders. Ozelli explained that the company’s opinion is that what the retail traders do well is to predict the direction of the market. However, where they fail is in risk management; specifically handling losses and opening suitable position sizes. The result is that a retail trader can be correct more than 50% of the time, but still lose money. 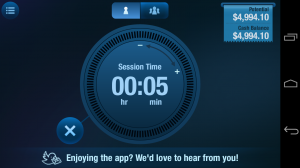 Flick-a-Trade’s solution is that customer losses are limited by the size of the amount entered for each trading round. Depending on the wagered amount, each new position size is also adjusted. Therefore, in a short duration a customer would be hard-pressed to open so many positions to expose themselves to losing their entire amount allocated for the round. Also, as the duration of each trading round is finite, the app enforces a level of risk management that forces users to focus on the short-term direction of the market and cashing in quickly or cutting losses before the round ends.

Despite the gamelike interface, according to Ozelli, Flick-a-Trade is powered by a robust trading platform technology. This includes a liquidity matching engine, pricing infrastructure to store and serve an average of 9.6 million prices a day, multi-currency accounts and payment processing, and social network integration. In addition are back office features handling risk management, customer ID and verification.

So is Flick-a-Trade the future of online retail trading platforms? The short answer is no, and the app’s developers don’t view it as such either. But, its emergence follows a trend of simplified financial products which is quickly developing along multiple asset types and has been catching on fast among consumer users.

It’s all very good, but it’s getting further away from the idea that FX is a FINANCIAL services industry to begin with… And now let’s turn everything into gambling. Awesome.