Having developed products for iOS and touch enabled Windows 8 devices, ChartIQ’s HTML5-based charting and technical analysis app finally has arrived to Android. Since launching their products as initially only by subscription, ChartIQ’s products now offers a free version, with the Android app coming to market with free end-of-day data and integration with StockTwits. In addition to the Android app, ChartIQ has also been adding features to its existing apps, such as the setting to save charts and annotations directly to websites as well as new technical studies. 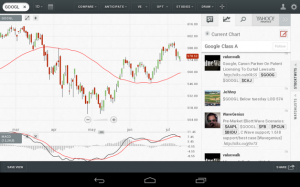 Since first covering the company last year, ChartIQ has moved its focus from developing apps directly for retail and professional traders towards licensing their technology. Demand for their products is based on their HTML5 technology, which provides a cross-platform and cross-system solution which has become increasingly more important as users have shifted more of their trading and market monitoring onto mobile devices.

Speaking to ChartIQ, CEO Dan Schleifer, he explained that they are seeing demand from firms with existing trading platforms who are making a decision to update their products to become mobile friendly. But, due to the costs involved with creating responsive HTML5 charts in-house, brokers are seeing better value by licensing ChartIQ’s charts. Within the retail Forex industry, Leverate was one of the first firms to license ChartIQ’s technology as it was used in the company’s new Sirix trading platform which was launched in the middle of last year. In addition, eToro’s web-based platform integrates ChartIQ’s technology for its charts.

In regards to ChartIQ taking the unusual path of launching its Android app well after developing their product for Windows 8, which very few firms do, Schleifer stated, “We’ve had a lot of demand since we first launched as a company. For the past year or so we’ve supported most Android phones and tablets via Chrome or Firefox, but not with installed apps or other browsers.” He added, “iOS and Windows 8 have much better – and most importantly more consistent – performance for HTML5. Because Android is so fragmented, with so many versions and so many hardware options, ensuring high performance has been a challenge. We’re the first and only HTML5-based technical charting vendor to overcome this – delivering consistent performance across Android, iOS, Windows 8, and the web.”  Among iOS users, Schleifer stated that they currently have 75,000 non-white label users of their iOS app.