Earlier this month we posted about Coinsetter, a New York based startup that is building a bitcoin trading platform that provides traders with leveraged trading and the possibility to short the digital currency. The company had just announced that it had closed a seed funding round of $500,000 that was led by leading bitcoin related Angel investors Barry Silbert and Jimmy Furland.

At the time, Forex Magnates and many readers speculated on the how the trading platform would operate, specifically in relation to leverage, short sales and handling risk. The expectation was that Coinsetter was creating a CFD type product, where real time prices would be derived from current trading of bitcoins. To learn more about Coinsetter, the trading platform, and just why they believe their product will be able to meet the needs of “serious forex traders”, Forex Magnates spoke to Jaron Lukasiewicz, Founder and CEO of Coinsetter.

Lukasiewicz explained that what Coinsetter is building, is not a CFD product, but an ECN style exchange that aggregates liquidity from external bitcoin exchanges, while simultaneously operating an order book to match internal client order flow. By aggregating multiple venues, Coinsetter is aiming to create the most liquid market for trading bitcoins, to appeal to the most aggressive and high volume traders. As an ECN, the platform will be charging volume based commissions, which decrease on higher activity and “are skewed to appeal to high volume traders”.

Like any ECN, one of the biggest concerns is latency. This comes in the form of accessing real time pricing from member exchanges as well as the execution of orders. While price aggregation can produce the tightest spreads and abundant liquidity, the system only works if users are filled on the prices they see. The presence of one slow feed can trigger rejected orders and slippage. Specifically in relation to bitcoin exchanges that have been the target of DDoS attacks as well as experiencing skyrocketing trading volumes that are beyond their normal abilities, latency of price dissemination is all too common. To handle this problem, Lukasiewicz stated that “latency will be less of an issue on the platform and we will be able to turn venues on and off.” 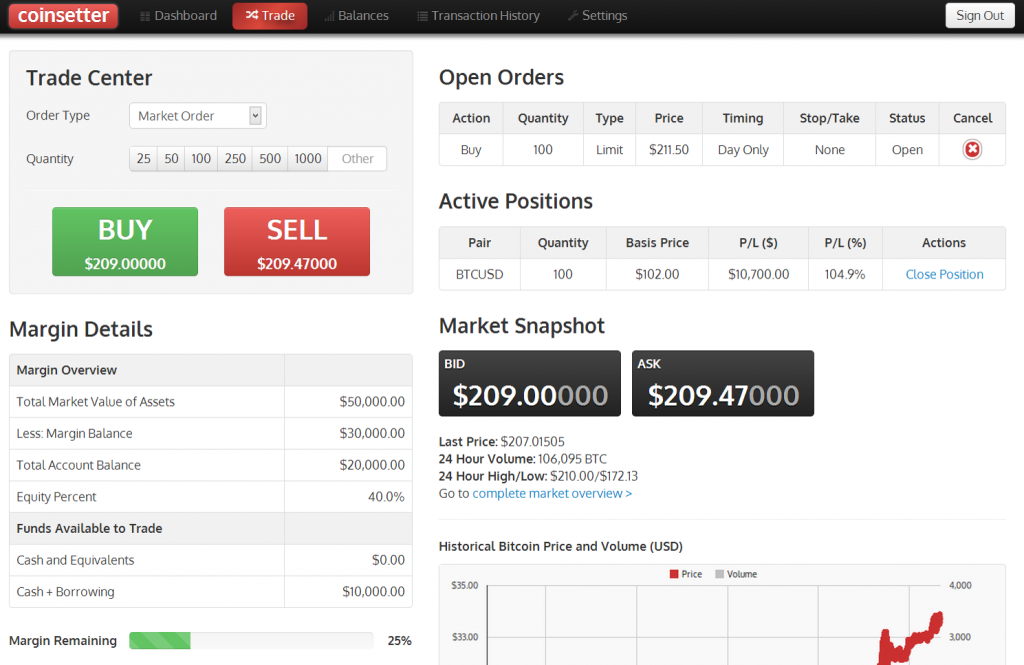 The big question is just how will traders be able to short bitcoins. Unlike a CFD which is a synthetic contract between a broker and trader, shorting an actual asset entails borrowing and selling the product. With stocks, brokers lend their clients shares, which are sold by the trader and returned when the position is closed. To conduct a short trade, customers use a ‘Margin’ account which permits both borrowing of shares and cash. In situations where a stock may be ‘over’ short by the market, it is common that brokers will announce to clients that they can’t provide addition short sales due to not enough shares available for lending. While borrowing stock works in a situation where the broker is simply lending shares from one account to another, how does this work with bitcoins?

Providing a solution for bitcoin traders, Coinsetter is funding its trading platform with currency that is being earmarked for lending to traders. Rather than borrowing and returning shares from fellow broker clients, Coinsetter traders will initially be lent shares directly from the company. As this produces a scenario where there is limited liquidity available for shorting, and also exposes Coinsetter to price changes, Lukasiewicz added that “over the long run, Coinsetter is building the first viable bitcoin lending business, where accredited investors and bitcoin institutions can earn interest on their holdings”. Lukasiewicz explained that “there is a lot of demand for bitcoin holders to earn interest on the bitcoins they have sitting around. These deposits could then be used to provide addition liquidity for short selling.” In the same manner that banks lend out customer deposits in the form of mortgages and auto loans, Coinsetter is planning on earning revenue on its customer’s bitcoins through margin fees related to short selling the currency.

The long term goal of becoming a destination for bitcoin deposits is part of Coinsetter’s aim to become large enough where the aforementioned internal matched order flow accounts for the majority of trading on the platform.

To attract high volume traders, Lukasiewicz stated that they are focusing on creating a “better trading experience” in a “super secure and reliable platform”. Coming from a finance background, Lukasiewicz’s team is working on implementing an interface that incorporates features seen on high level trading platforms. This includes the abovementioned liquidity aggregation, custom charts, technical analysis, and the release of a FIX API for users to access the trading platform with their own third party programs. In addition, Coinsetter is working on ways to ensure security and ultimately to “prove that the platform won’t be hacked,” a wide spread problem for bitcoin exchanges.

Lukasiewicz believes that if they can deliver on providing a high-end and secure environment, there is enough demand in the market to produce tremendous volumes. In addition to existing bitcoin traders that are seeking deep liquidity venues, Lukasiewicz pointed to interest from brokers, where Coinsetter’s API could provide a source of liquidity for them. He also mentioned that there is interest for tradable bitcoin products denominated in additional currencies such as CNY/BTC. Currently, Coinsetter is scheduling a summer launch of the platform.

One of the big concerns about bitcoin trading is regulation. While P2P bitcoin transfers are quick and free, transferring funds to acquire the digital currency will almost always entail using a payment processing solution such as bank transfers or through e-wallets like Liberty Reserve or Dwolla. As such, the vast majority of bitcoin purchases is conducted through traditional bank gateways. While central banks around the world are studying bitcoins, there has been very little in the ways of formal regulation being formed. With financial firms bound by central bank regulations, a negative ruling could overnight stop the flow of funds through banks. In this respect, failed exchange Bitfloor has been rumored to have been hit by the closing of its US bank account due to money laundering concerns.

Not waiting for regulation to get passed, Lukasiewicz told us that “many US firms are working together to create a path for regulation. “ He added that “firms are self-regulating themselves, giving consideration to how we may be regulated in the future.” This has led companies to apply anti-money laundering, and ‘know your customer’ (KYC) policies in place.

After seeing the bitcoin market develop on the back of early adopters and exchanges, the rise of interest and volumes over the last few months has triggered an entirely new wave of an entrants into the market. Experiencing the difficulties of the current bitcoin landscape, these firms are bringing along leading technology solutions and venture funding. The new found love in the sector is also allowing existing firms to tap into outside investors and professional partnerships as their present active client bases offer tangible financial prospects.

At this point it is too early to know who will ultimately be the long time leaders in this constantly evolving space. But, with the launch of new technology from firms like Coinsetter, along with growing account holders and corporate investing due to the increased exposure, bitcoins have a solid foundation that should propel its lasting power.

(According to Coinsetter, platform image is for reference only as final design may look different at launch)

“latency will be less of an issue on the platform and we will be able to turn venues on and off.”

That doesn’t sound very convincing at all.

There is still plenty of room for things to go wrong.. for example, how to determine if a quote is stale (that can mess up the whole book). Even in a mature market like fx aggregation is sometimes problematic, imagine bitcoins.. but it is probably the only way to start a new venue with any kind of liquidity.

Wondering if MtGox and co will decide to shut them out.

Here is a recent paper about the sad state of Bitcoin trading venues:

+1 for bitfinex.
A great concept and a good platform. It’s been up and running for several months.
The peer-to-peer lending in both USD (for going long bitcoin) and BTC (for going short bitcoin) is an innovative solution.

Armada works with LMAX. In terms of FXall, they are a hybrid since the platform is used for both ECN and relationship trading. Don’t believe retail order flow is a big factor of FXall’s total volumes

Armada works with LMAX. In terms of FXall, they are a hybrid since the platform is used for both ECN and relationship trading. Don’t believe retail order flow is a big factor of FXall’s total volumes