London Summit 2019 has officially ended, capped off as always by the annual Awards Ceremony at the Old Billingsgate.

With the final votes by industry peers all tallied, it’s time to see who took home this year’s honors as the best performing venues in the industry.

Each year, Finance Magnates has highlighted the leading industry participants that have excelled across key segments. As such, our multi-stage voting process has allowed the industry itself to ultimately rank the best and the brightest.

The awards recognize a wide array of different performers, including the best providers in liquidity, execution, trading platform, marketing and performance, and other aspects of the trading industry eco-system.

In 2019, voting was partitioned into two stages and featured a total of twelve distinct categories. Last week, registered attendees voted on a narrowed shortlist, and the winners have now been announced.

The ceremony was an exciting finale to what proved to be yet another successful summit. London Summit 2019 featured upwards of 3,000 attendees with Finance Magnates’ CEO Michael Greenberg distributing the awards to the winners.

The following companies were selected by their industry peers as the winners in each respective category: 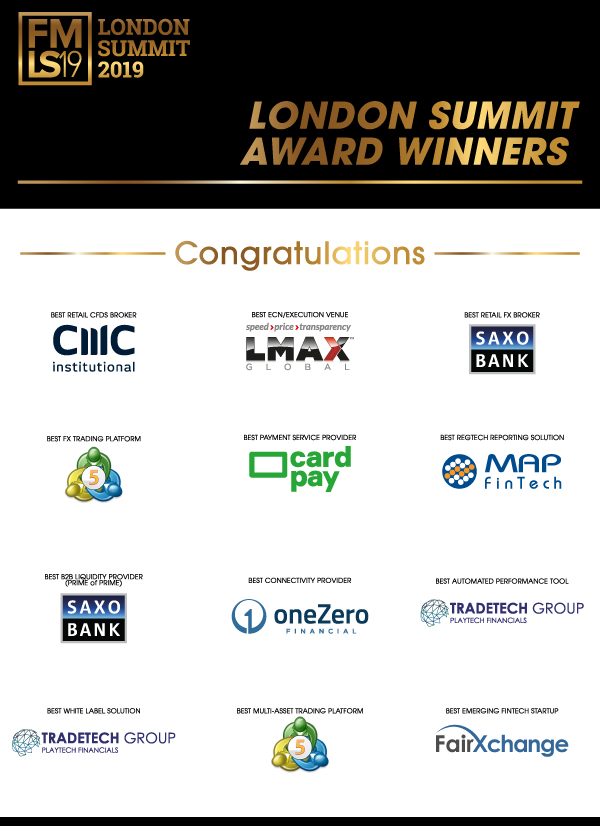