USGFX’s approval, no 49854, was issued on October 6, and it allows the privately-held firm to act as an OTC derivative provider and therefore is permitted, under regular features of its business, to ‘originate, issue, sell or make a market in OTC derivatives’.

According to the local laws, USGFX is required to appoint registered representatives in the country, at least one key individual and a compliance officer in order to effectively take part in company management.

Company records and FSCA filings by USGFX show that Mrs S L Schoeman was appointed as compliance officer and Elisha Lurie as head of the South African entity. Prior to Union Standard, Lurie worked at Iza Capital Partners, an asset management company incorporated in Mauritius and licensed in South Africa. 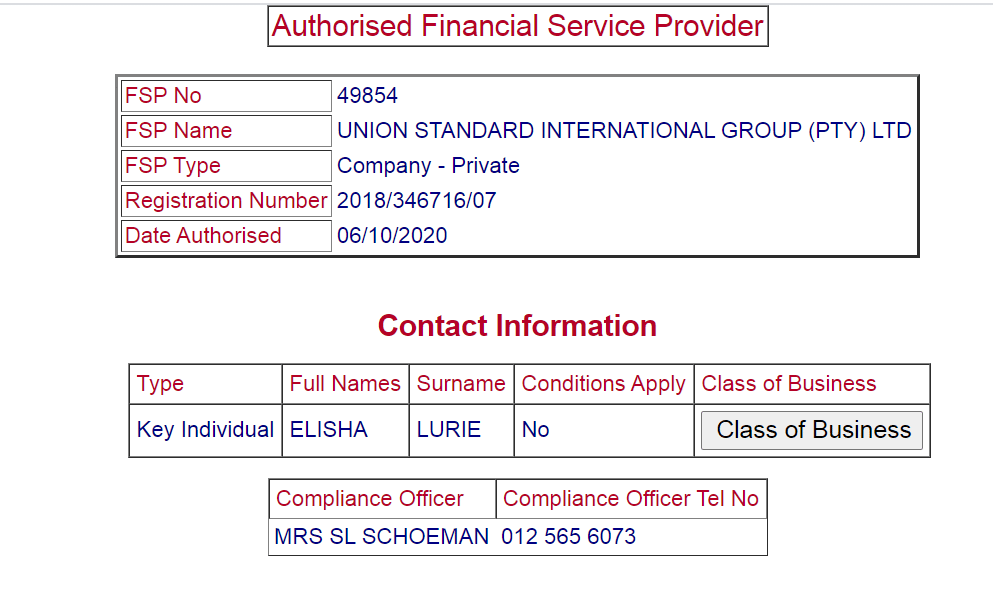 In August, the board of USGFX announced that the headquarters of the brokerage will be moved from Australia to London. Until recently, the UK and Australian entities shared the same directors with the UK subsidiary is majority owned by Myanmar-based, Hein Min Soe, who was also a director of the Australian business. However, earlier this month Hien Min Soe stepped down as a director of the brokerage’s United Kingdom-based business.

South Africa enjoys a strong and well-organized financial market and therefore has become a popular destination for brokers looking to expand. It is one of the world’s top ten capital markets and boasts thousands of investors. The country itself is a diverse market that is largely devoid of the market saturation seen in other jurisdictions such as Europe.

At a glance, USGFX seems optimistic about the South African economic landscape and the prospects for business into the dark continent. However, the move comes as English Premier League upstarts Sheffield United’s key sponsor restructures its business after it lost its Australian Financial Services (AFS) license.

The Australian arm of USGFX has collapsed into administration amid an investigation by the corporate watchdog into its trading platforms. The cancellation of USGFXs AFS licence follows on from the broker being ordered to enter into liquidation by the Federal Court of Australia in August.

In securing the orders, ASIC told the court it had concerns that USG and its two representatives had engaged in “dishonest and unfair conduct in the course of carrying on its financial services business in Australia,” including preventing customers from withdrawing money from their accounts.

The UK operation, USG UK, which is regulated by the FCA is not affected by this situation and continues to trade as normal.

Opened its doors for business more than a decade back, USGFx is one of the oldest foreign exchange brokers in the Pacific Rim. The company has its headquarters in Sydney, but with branches in Auckland, Shanghai and Hong Kong.

Share this article
Tags: broker
Got a news tip? Let Us Know