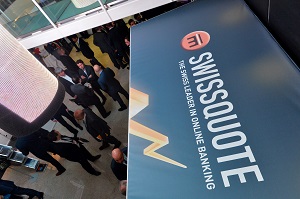 Swissquote ended 2014 with a bang as it entered the $100 billion club with its Q4 results. During the October to December period, volumes hit a record of $330 billion, or $110 billion per month. In dollar terms, the activity marked about a 30% increase from the same period in 2013 which represented the first full quarter following Swissquote’s acquisition of MIG Bank.

For Swissquote, following their acquisition of MIG Bank in September 2013, the broker set a goal of reaching one trillion CHF in forex volumes during 2014 with 500 billion splits per half year. The internal forecasts were based on initial performance on the merged brokers, of which volumes for Q4 2013 totaled CHF 226.3 billion (@ $256B). The weak start to 2014 across the industry though impeded Swissquote’s initial goals, with H1 volume figures failing to break the CHF 500 billion barrier, only achieving a CHF 437.7 billion (@ $495B) mark.

At the time of the MIG Bank acquisition, one of the analysis points we uncovered was that Swissquote was taking over a business that had experienced a decline in revenue capture, underperforming industry averaged. Despite achieving flat volume growth during the first half of 2014, Swissquote did appear to have managed to correct some of the margin weakness affecting MIG Bank’s customer flow. This was apparent as financial figures for H1 2014 showed that revenues per million dollars traded figures were above what MIG Bank had been performing in 2013 prior to their merger.

Explaining the success and update on the operations of Swissquote’s retail forex division following a full year after their acquisition of MIG Bank, Ryan Nettles, Director of Forex Services at Swissquote commented to Forex Magnates, “The integration of MIG Bank’s business was executed successfully as planned and we have been able to capitalize on the synergies of the combined eFX businesses. Today, in addition to our headquarters in Switzerland, we now have strategic regional international locations in London, Dubai and Hong Kong to better service our clients and continue our growth strategy in the eFX business.”

(Editors note: USD/CHF figures quoted above use average exchange rates for the period that the volumes took place in and not current rates)

Share this article
Tags: brokers / swissquote
Got a news tip? Let Us Know

If they don’t charge commissions – how do they make money?

AFAIK the LPs the provide liquidity through FXSS are the owners of the company.

They created this solution to avoid paying other aggregation engines like Integral, Currenex, Hotspot, etc when delivering API based (no front-end) aggregated liquidity.

Not disclosing their volumes is weird and there only can be one reason for it.