Saxo Bank launches “Morning Kickoff” and “Charts of the Day” on TradingFloor.com to provide you with a daily overview of the forex market. The main purposes of the “Morning Kickoff” is to cut down on all the unnecessary market news, noise, and to provide you with a comprehensive market sentiment. “Charts of the Day” provide you with multiple charts that are geared toward supporting you with an easy to understand graphs of other markets (Central Bank Rates, Inflation, etc) that may assist you with your overall forex strategy. I’m going to put the Saxo Bank publications to the test against the USD/JPY currency pair from Sept.6th to 8th and see if it actually does provide me with an edge, while trading in the forex market. 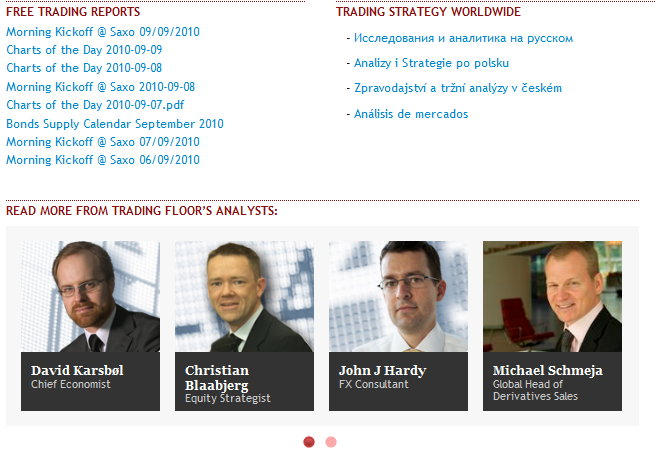 I would like to start off by indicating that I trade based on daily charts, resistance/support lines, and market sentiment. So my strategy is a combination of technical and fundamental analysis.

My Analysis: The USD/JPY starts the week at 84.20 and has the bearish sentiment. On the downside, if the 83.58 support line is broken, then expect it to target the 82.00 to 80.00 level. Market will be extremely slow today due to being a Holiday (Labor Day) in the U.S and Canada. Expecting low volume trading and not much action from the USD/JPY.

Morning Kickoff & Charts of the Day Publications: “Expect fairly light action.” For some odd reason, I’m unable to find the “Charts of the Day” … However, wasn’t expecting much more information from the charts.

My Analysis: The USD/JPY will continue to be bearish unless the 86.36 resistance line is broken. On the downside, if the 83.58 support is broken it will indicate a strong bearish sentiment to target the 82.00 to 80.00 level.

Morning Kickoff & Charts of the Day Publications: “The Bank of Japan failed to do anything except keep rates low, which combined with a retreat in general to safehaven currencies has sent the Yen higher. Japanese prime minister rival, Ozawa had put pressure on current PM Kan ahead of the meeting overnight, but that didn’t translate into BOJ action. Rates were unsurprisingly kept at the ridiculous level of 0.10%.”

Result: Both analysis expected that USD/JPY to stay bearish. The 83.58 support line was broken and it had reached the low of 83.50.

My Analysis: Since, the USD/JPY broke the 83.58 support and reached the low of 83.50. I’m expecting the bearish sentiment to continue because the BOJ hasn’t indicated an intervention. The U.S and European Union are unwilling to coordinate a currency ease with the BOJ.

Morning Kickoff & Charts of the Day Publications: “Given the strong JPY in recent quarters the trade balance numbers are encouraging though that didn’t stop Finance Minister Noda from once again complaining about the strength of the Yen.”

Result: The USD/JPY declines further to the 83.33 support, but has moved to the upside after the Finance Minister Noda “complained” and indicated that “bold action” will be taken. The “Morning Kickoff” failed to take into consideration that many forex traders started selling off their bearish positions after Noda’s announcement.

Case study Result: The Saxo Bank “Morning Kickoff” proved to be useful and valuable. I cannot say the same about “Charts of the Day” … The charts are very detailed but aren’t necessary to trade in the forex market. I think sometimes too much information causes over-analyzing, so I would recommend sticking with “Morning Kickoff” report for now.