After a month of heavy trading volumes losses, trading activity at Danish multi-asset brokerage Saxo Bank has rebounded substantially in March. The increase amounted by almost 40% to $250 billion, after the company announced a 40% drop last month from January’s $302 billion figure, marking the lowest month in several years at merely $179 billion.

On a year-on-year basis, the reported number is higher by almost 5%. 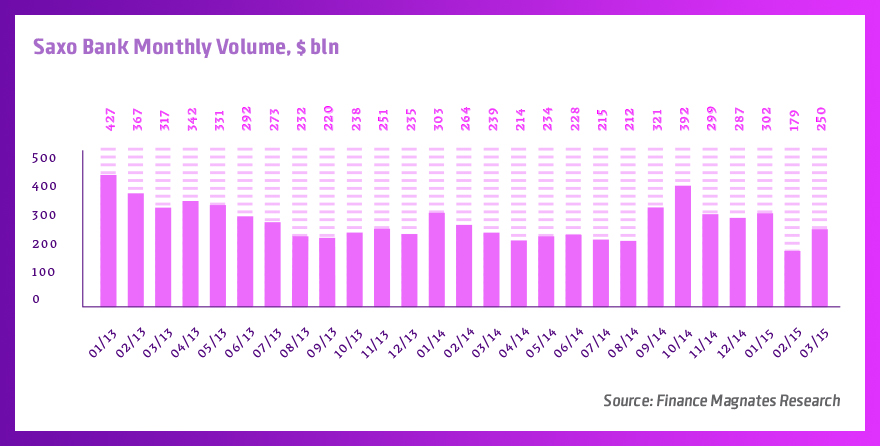 Last month, collateral deposits at Saxo Bank increased to an all- time high in Danish krone terms, the currency in which the multi-asset brokerage reports its results. The figure has remained more or less similar to February, declining merely 1.6% in March.

Trading activity in March has been boosted substantially by rising volatility across the foreign exchange space, especially during the days surrounding the Federal Reserve’s announcement about future path of interest rates.

At the time we saw substantial volatility in the foreign exchange market followed by equities and commodities.

In the aftermath of the Swiss National Bank surprise decision to remove the floor from the EUR/CHF exchange rate, trading volumes figures across different brokers have come under increased scrutiny. In February, activity dropped across the board, prompting speculation about the state of some brokers post-SNB event.

The figures from the coming months will remain closely monitored in order to ascertain whether the February hiccup in trading activity across a big majority of brokers is merely a reflection of low volatility.