As we have done in the past, today we are taking a closer look at FXCM’s Q3 2013 financials following the release of their SEC filed 10Q and earnings conference call. Issued earlier this month, FXCM reported a loss of $5.12 million on revenues of $113 million. Compared to Q2 2013, revenues declined 19.2%.

UK regulation leads to loss: Leading to FXCM’s loss was the creation of $15 million in loss reserves that were created to meet potential payouts to UK regulators. The reserve is based on an ongoing investigation by the FCA that began in September 2012 in regards to the execution slippage that took place on orders until August 2010. According to FXCM’s 10Q, in October 2013 the FCA issued FXCM a “ formal settlement offer together with a Draft Warning Notice providing UK and FSL with the opportunity to reach an early settlement in connection with an ongoing investigation regarding past trade execution practices. “

Commenting on the matter, an FXCM representative explained that, “The dispute with the FCA pertains to an ongoing investigation regarding past trade execution practices concerning the handling of price improvements in the FXCM trading system prior to August 2010. As of August 2010 FXCM enhanced its trading execution policy to help ensure that clients benefit from positive slippage on all market, limit and limit entry orders. The policy was further enhanced in December 2010 to address all order types, including stop and margin call orders, through FXCM’s No Dealing Desk (“NDD”) forex execution model. At this stage the enforcement investigation has not yet been resolved and there has been no finding of wrong doing. FXCM is one of the only FX brokers to give clients price improvements.”

In terms of FXCM, at this point there is no definitive answer of whether the $15 million amount will cover all potential payouts in this case, but as the FCA issues a settlement offer, it is a safe assumption that definitive amounts with the regulator are being discussed. In addition, FXCM was the subject of similar fines and payouts from the NFA and CFTC in 2011. Therefore, a precedent calculation exists within the industry. On a more overall sense, while lagging behind asymmetric slippage charges from the NFA, any charges by the FCA to FXCM would be expected to open the gates to additional investigations taking place within other UK licensed brokers.  As a result, while currently leading to potential losses for FXCM, the overall ramifications of the FCA analyzing Forex broker executions could have much larger effects on the industry.

Faros Trading – Announced in September, FXCM acquired a 50.1% stake in Faros Trading, a provider of market intelligence and execution services for the institutional FX market. According to FXCM, the deal is expected to position the firm better within the institutional sector as it will bolster its offerings. FXCM reported in its 10Q, that the purchase price of the majority stake was $15.631 million, which includes a $5.0 million initial cash payment and $10.6 million in FXCM shares to be paid in 2015 based on certain performance metrics being made (The details of the review where Forex Magnates underestimated the value of Faros Trading, as our initial estimates were based on a much smaller initial cash portion in-lieu of FXCM providing wider distribution of Faros’s offerings).

Within FXCM’s conference call, Niv mentioned that the Faros Trading deal was part of the broker’s expansion of coverage in its institutional trading division. Niv added that Faros primarily services firms that aren’t FXCM clients; thus providing inroads to new customers. Income-wise, Niv answered analysts that they don’t expect the deal to materially affect their bottom line for a few quarters. Longer term, he expected the deal to lead to higher revenues per million from their institutional business, as Faros is expected to provide value-added services to their executing clients.

Following up with the firm, a FXCM representative explained that the aim of the deal is to generate increased volumes from higher commission paying clients of its institutional offering. This will be done by both targeting existing Faros’ clients, such as asset managers and macro funds, as well as offering Faros Trading services to existing FXCM Pro customers.

Retail revenues per million – During the quarter, retail revenues per million dollars traded (RPM) dropped back below $90 to $89. The firm has publicly stated that it has a RPM target of $90-100. According to FXCM, RPM dropped due to “a higher proportion of volume coming from yen-based currency pairs in the three months ended September 30, 2013, where we earn a lower mark-up on these trades.” Overall, the RPM effect meant that despite volumes rising 13.8% from the same period in 2012, retail trading revenue only rose 2.0%. A similar yen related RPM effect occurred in Q1. Looking ahead, RPM could continue to trend lower if Asia becomes a larger portion of FXCM’s retail business.

Geographic distribution – In regards to Asia, during the quarter the continent composed 47.1% of FXCM’s retail trading volume, which was the highest amount since Q3 2012. However, as seen below, FXCM’s geographical distribution has stayed very consistent over the past two years. The figures appear to indicate that while Asia is cited within the industry as the hottest market, regional growth is a cyclical business, with no global volumes activity more or less in-line. 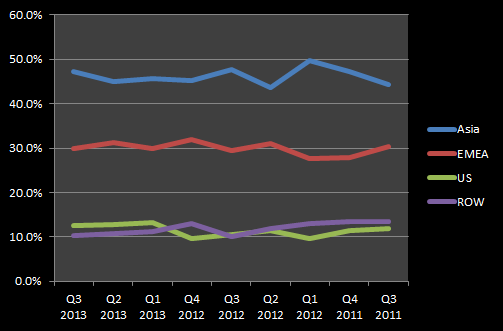 CFD Growth – FXCM related that CFD revenues grew to 37% of overall retail trading revenues during the quarter, well above the 28% mark of the same period last year. The figures were similar to results expressed to Forex Magnates by other brokers. In terms of overall industry trends, the shift among client interest towards CFDs and other non-forex products relates that clients are increasingly interested in wider asset choices.

Mergers and Acquisitions – Last but not least, no discussion about FXCM is complete without mentioning M&A activity. During the quarter, FXCM made three deals; the above mentioned equity stake acquisition of Faros Trading, assuming US accounts from Alpari, as well as acquiring a note from Infinium Capital Markets together with Lucid Markets. In the conference call, Niv said that they are continuing to review a range of potential transactions. He stated that the lower volatility market was historically conducive for deals.

In regards to potential acquisitions, FXCM didn’t hint to any specific types of brokers other than Niv mentioning they were reviewing the retail sector. However, based on the firm’s previous buys, it is apparent that FXCM is targeting accretive deals of brokers who are financially healthy. As such, despite larger, negative growth, brokers such as GFT, MIG Bank, IBFX, and London Capital opening themselves to buyers, FXCM wasn’t rumored to be a serious interested party of any of those firms. Among candidates, Alpari is the name that is most linked to FXCM. After taking on Alpari’s business, it is widely assumed that FXCM also ‘took a look’ at the greater company. However, with Alpari seeing strong volume growth this year, even if  the broker were to be open to a sale, they are probably seeking a higher premium than FXCM would be willing to offer, given the need for earnings accretion.