There is no arguing that binary options trading has become one of the fastest growing subsets within the online forex industry. While not your traditional trading product, binary options provide customers the ability to enter into short-term options on the direction of currencies, stocks, commodities and equity indexes. The popularity of the product has created a new class of short-term financial products that are created to be easily understood by broker customers. On this, Peter Karsten, CEO of BDswiss, explained to Forex Magnates that he believes we are just in the beginning of the establishment of “simplified financial products,” to which binary options belongs to. In terms of opportunities for brokers, Karsten related, “That barrel isn’t anywhere near being scraped yet,” and longer term potential for success is ripe. 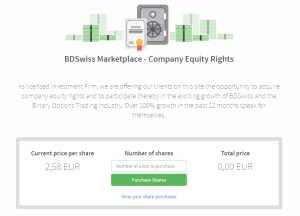 As part of their belief in the future of the industry, BDswiss is launching an equity marketplace initiative for account holders which provides them the ability to buy equity rights in the company. Using their CySEC financial license, BDswiss isn’t selling new shares to the public in a traditional IPO process, but will be acting as the broker-dealer between private equity sales of company owners and account holders. The process will work similarly to that of SecondMarket where equity and options holders of private firms are able to offer their stakes for sale to outsiders.

According to Karsten, they don’t have a specific limit on how much equity they are attempting to sell, but have a target of around €3 million. If successful, the sale would be unique for the industry, of which there are currently several larger firms actively looking to tap the public market.

As a private sale, BDswiss isn’t required to provide disclosure in the form of a prospectus, but prospective equity buyers are able to contact sellers to gain additional information about the sale. According to Karsten, BDswiss which was launched in 2011 and began in earnest to do business in 2012, tripled its revenues in 2013, and has surpassed those figures so far in 2014.

Speaking to BDswiss owners, the company acknowledged to Forex Magnates that the private sale is partially a marketing procedure as buying shares is only available to account holders. However, it is also part of their greater push to expand their ownership numbers and increase awareness of their brand, as they will be making a push beyond their German-speaking market into the UK and other regions. Beyond expanding into different regions, a SpotOption label, BDswiss has ambitions to market to clients other forms of simplified financial products to customers in the future as they diversify their overall brokerage offering while upselling new products to existing customers. Karsten also related that BDswiss is aiming for a public IPO in the summer of 2015, with current sale prices of shares calculating to around a $65mln valuation for the broker.

For account holders who take advantage of the sale, the potential is that share values grow with BDswiss expanding its product offerings and client base. However, like any investments in a startup, there exists the risk that BDswiss will not reach its target growth and lose its competitive edge, specifically in their German-speaking base. In regards to this worry, Karsten said that besides being KPMG audited, BDSwiss is cash flow positive since the beginning of 2013, and overall expects to exceed $15mln in revenue in 2014.

Share this article
Tags: brokers / IPO
Got a news tip? Let Us Know