Poland, one of Europe’s most sophisticated and established centres for FX and CFD trading has seen its domestic firms flourish over the last five years. EFIX Dom Maklerski, a Polish brokerage firm (introducing broker to GFT) has successfully listed itself on Poland’s alternative stock market, NewConnect. The firm will commence trading from the 21st of August.

In a notice on the NewConnect website the terms of the issue were provided: “the WSE Management Board resolves to introduce to the alternative trading system on the New Connect 40,000 (forty thousand) shares of series G shares EFIX brokerage SA with a nominal value of 10 zł (ten) each.”

New Connect was established in 2007; currently there are 447 listed firms. The alternative market which is based on the UK’s AIM has seen modest growth figures, the total trading volume in July 2013 on NewConnect saw an increase of 69.2%, from figures reported in 2012 in July, the exchange recorded US $29 million up from $17 million in 2012 for the same month.

EFIX was established in 2002 during the plight of the e-trading revolution. The firm has been an active participant in both domestic and international markets. The firms listing highlights the growth opportunities present in Eastern Europe’s most populous country.

Poland’s FX environment was centered around brokerages, however with the recent volatility driving interest away from the domestic stock market to the intentional FX markets and the ongoing enhancements in available solutions to firms looking to roll out solutions with minimal technicalities. A new generation of financial institutions have entered the market. Major Polish banks including BRE Bank, Alior, WBK and Noble Bank have caught onto the FX bandwagon; most banks have opted for ECN solutions offered by firms like Integral Development.

Banks have taken advantage of their good standings in the market and ability to offer seamless trading, furthermore, Bogumil Nurkiewicz an experienced financial services professional from Poland informed Forex Magnates about a project he has worked on where he initiated a faster payment method for traders at a leading Polish Bank that launched FX trading, he explained: “at Alior, we implemented in real-time deposits/withdrawals from the clients normal bank account. For clients its important functionality as market is very volatile today.”

The Need to Trade

Polish retail investors contribute significantly to trading volume in the domestic market. The exchange, since its inception post-communist break up, has been carrying out extensive education programmes to encourage participation in the financial markets.

Tomasz Maczka, Director of Sales Department at Noble Securities a full service financial services firm offering MT4 commented to Forex Magnates about the hunger individual investors have to trade in Poland, he said “Individual investors in Poland are known for being rather active traders on the Warsaw Stock Exchange. However, during last 3-4 years, due to lower volatility on the stock exchange and bear market, they have became more interested in alternative investment opportunities with currency markets among them. In addition, the Polish Zloty has experienced periods of strong volatility against the Euro Dollar or Swiss Franc, therefore this intense volatility has opened up new opportunities for traders.”

The latest development clearly differentiates Poland from its peers such as Turkey and Germany this should give confidence to local firms and the industry at large that the broking sector has a lot of potential. We expect Poland to spearhead the continued growth in FX and more firms to go for IPO in gets coming 18 months.

The only way is public

TMS Brokers, a Polish FX & CFD broker went public on NewConnect in 2011, before the issuing, its shares were trading at PLN 61, in the first week of going public the broker saw its share price reach PLN 79.90 an increase of over 30%.

Recently, Plus500 a FX and CFD broker was listed in London, the firm managed to raise $75 million, higher than their initial target.

On a another positive note, the two FX giants FXCM and Gain Capital both saw their share price rise on the back of strong operating metrics, the duet hit new 52 week highs in this August, FXCM reached $19.24 and Gain traded at $7.85. 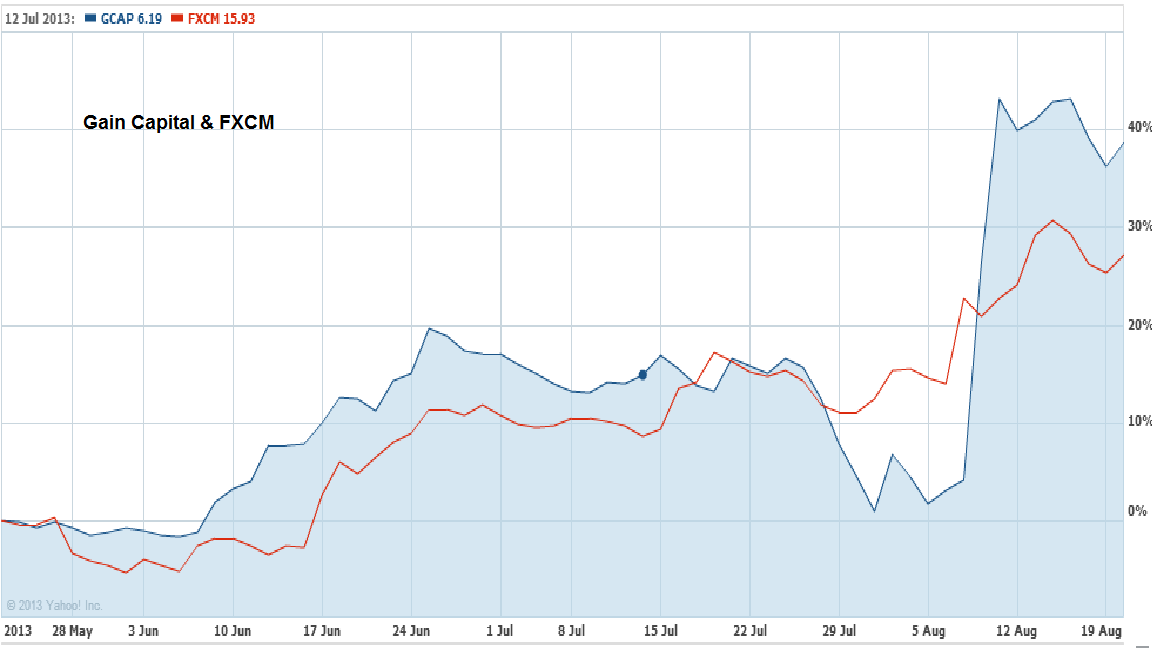 Share this article
Tags: brokers / poland
Got a news tip? Let Us Know

@Johannes – good point, the GFC more or less took out most of those volumes and drove the decent traders to private desks or hedge funds

@Johannes – good point, the GFC more or less took out most of those volumes and drove the decent traders to private desks or hedge funds

Poland jest bardzo pienknie, watch how it will dominate the FX markets for CEE

Poland jest bardzo pienknie, watch how it will dominate the FX markets for CEE

Adil, I’ll do everything not to disappoint your thesis 😉

Adil, I’ll do everything not to disappoint your thesis 😉

yes, they are back friends 🙂

yes, they are back friends 🙂

@Jon – it appears that some brokers had been experiencing difficulties opening bank accounts in some jurisdictions if they are a CySEC broker – http://forexmagnates.com/a-risky-business-cyprus-fx-firms-met-with-cold-reception-when-applying-for-non-cyprus-bank-accounts/

I guess due diligence procedures among banks are always tightening when accepting corporate clients.

@Jon – it appears that some brokers had been experiencing difficulties opening bank accounts in some jurisdictions if they are a CySEC broker – http://forexmagnates.com/a-risky-business-cyprus-fx-firms-met-with-cold-reception-when-applying-for-non-cyprus-bank-accounts/

I guess due diligence procedures among banks are always tightening when accepting corporate clients.

I tried to look up this company on the WSE but there is no sign of it.

I tried to look up this company on the WSE but there is no sign of it.

Adrian, its not listed on main market but New Connect.
Details here: http://www.newconnect.pl/?page=znajdz_spolke_en&ph_main_content_start=show&ncc_index=EFX

Adrian, its not listed on main market but New Connect.
Details here: http://www.newconnect.pl/?page=znajdz_spolke_en&ph_main_content_start=show&ncc_index=EFX