Monex Group, Inc., a Japanese financial services giant, announced this Tuesday that it would be granting Bitcoins as a mid-term shareholder benefit for the 2019 fiscal year. The benefit, which will be granted in conjunction with the existing benefits offered by the Group, will be given to those who hold the company’s shares as of the 30th of September 2019.

For shareholders who hold Coincheck accounts, Monex will grant the equivalent of ¥500 yen ($4.65) in Bitcoin. According to the statement released today, the Group has yet to determine whether granting cryptocurrency as a part of shareholder benefits will continue after the 31st of March 2020, which the fiscal year ends.

This new benefit is granted to all shareholders of Monex, regardless of how many shares they hold, the company said. However, shareholders will only receive this benefit if they have an account with Monex’s cryptocurrency exchange Coincheck.

“Shareholders are required to open accounts in Coincheck and complete the application in the “Shareholder Benefit Application Site” by 11:59 p.m. on March 31, 2020 in order to receive 500-yen equivalent cryptocurrency BTC in early April 2020.”

In addition to offering cryptocurrency benefits, shareholders who hold the company’s shares under custody in brokerage accounts of Monex, Inc., will be offered “Monex Points,” where one point is the equivalent of ¥1.

“Shareholders who own 100 shares (i.e. 1 shares unit) or more which are under custody in the brokerage accounts of Monex, Inc., a subsidiary of the Company, as of September 30 or March 31 each year, and who trade at least once per the referred period. The above only applies to the Company’s shares by cash trading, not by margin trading,” the statement said.

According to the company, shareholders who are eligible will receive Monex Points based on the amount of brokerage commission paid for cash trading of any symbols during a defined period. This includes the amount of consumption tax. The number of points provided is determined depending on the number of shares held at the reference date. 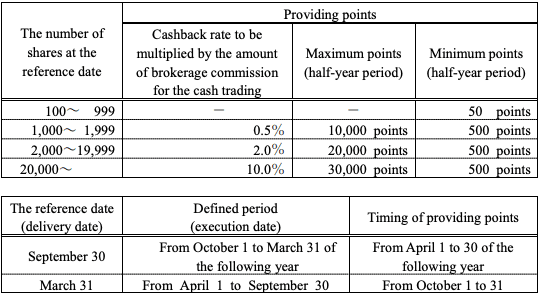