Interactive Brokers LLC (NASDAQ:IBKR) today reported its consolidated trading volumes for the month ending December 2016. Per its latest metrics filing, the figures represent a more steady average, given a retreat in volatility MoM.

November was notable for the passage of the US election and with it the surprise result that jolted global markets, thereby driving up volatility to yearly highs. Since then, the onset of the holiday season in the United States has ushered in a more normalized volumes reading, on par with the rest of the industry. 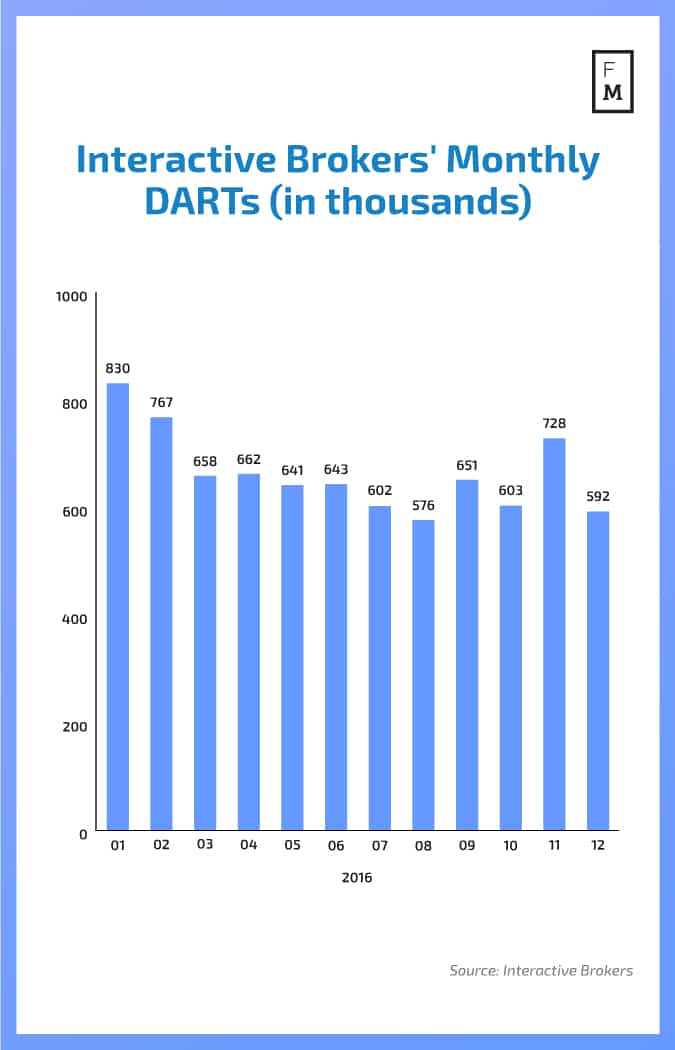 However, this climb was much more pronounced over a yearly timeframe, having jumped 26.9% YoY from $67.4 billion in December 2015, ultimately highlighting one of the strongest areas of growth at the brokerage.

Interactive Brokers’ ending client margin loan balances also continued their upward trajectory in December 2016, yielding $19.4 billion for the month, moving higher by a margin of 7.8% MoM from $18.0 billion in November 2016. However, over a yearly interval this growth was even higher, compared to just $17.0 billion in December 2015, or 14.1% YoY.

Moving to its customer accounts, Interactive Brokers reported a figure of 385,100 during December 2016, once again rising MoM, this time by 1.3% from 380,100 accounts in November 2016. Interactive Brokers has now seen its accounts rise in every calendar month this year, and YTD boasts an account growth of 15.1%.

Looking overall at the 2016 snapshot, Interactive Brokers did manage to see several positives in its volumes. Apart from the aforementioned hike in client margin loan balances and steadfast growth in equity balance in nearly every month, the group’s DARTs also bested their 2015 counterpart for the total year, rising 2.4% in 2016.