Trading volumes in Japan have trended lower in July with the biggest retail brokerage by monthly traded volume in the world, GMO Click, being the second to report a monthly decline this morning. The Japanese powerhouse has announced that its clients generated a total of $983 billion in trading volumes last month, which is lower by almost 9.5 percent when compared to June’s figures.

The number remains most impressive when compared to a year ago, registering a staggering 146 percent growth. The record low volatility on the foreign exchange markets last year challenged a number of brokers at the time.

Japanese traders have retracted from the market somewhat, but not enough to substantially dampen trading activity at GMO Click. The second half of calendar 2015 is starting well for the brokerage after it registered record breaking figures in the first half of the year. 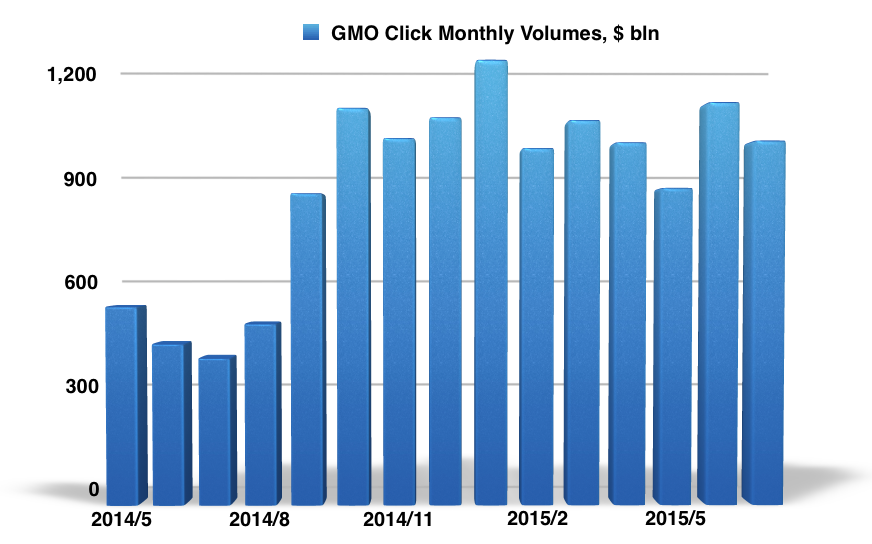 The Bank of Japan (BoJ) will be holding its regular monetary policy meeting this Friday, and while the policy is expected to remain unchanged, it is the press conference which will matter the most for Japanese traders.

Back in June, the governor of the BoJ commented that further depreciation of the USD/JPY rate is unlikely. The market prices are currently very close to the same level which he noted back then as “fair value”.

In a recent research note, Barclays downgraded the Japanese GDP growth forecast for the second quarter to a negative 1.7 percent quarter-on-quarter citing weak consumption and exports. Further trading activity on the Japanese market will strongly depend on Mr. Kuroda’s remarks on Friday.