Shares of GMO Click are lower by about 10% today to ¥1070, after it was announced that its parent firm, GMO Internet sold off a portion of its holdings in the Japanese forex broker. Spun off earlier this year, at the time of GMO Click going public on the JASDAQ market, GMO Internet continued to hold a nearly 100% stake in the company. Being sold today in an off-market sale to investors was 4.5% of GMO Click. Following the purchase, GMO Internet will continue to hold a dominating position in GMO Click, owning 93.9% of voting rights in the broker.

For GMO Internet, the sale registered a profit for the firm. Expected to be reported in its Q2 2015 financial report, the sale nets GMO Internet ¥4.7 billion ($37.93 million) on a consolidated basis. Despite disclosure of the profits, shares of GMO Internet are down slightly lower today. 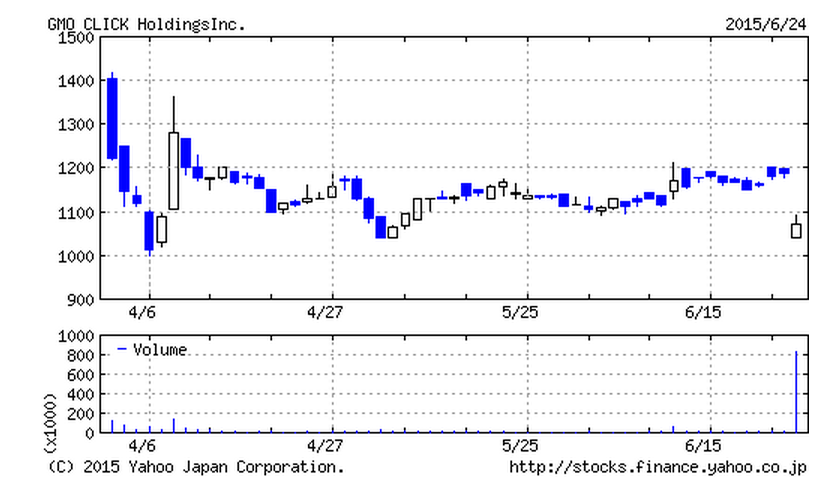 According to GMO Internet, the purpose behind the sale was to improve liquidity in available shares of GMO Click as it trades as a separate company. Despite GMO Click’s market capitalization of nearly $1.1 billion, due to the small float of available shares to the public, only a small fraction is available for private investors and institutions to purchase. With the added liquidity, it provides greater access to investors to increase their positions in the broker.

Overall, the activity in GMO Click’s stock is similar to other IPOs of companies where secondary sales compose the bulk of shares reaching the public. In February 2014, a similar sale was conducted by insiders of Plus500 who sold 17.4% of their holdings to the public. At the time, the increased supply led to shares dropping 11% on the day of the sale, before rebounding.