GMO Click securities, the world’s largest retail forex broker by volume has reported its December volume figures. Following a great November, GMO Click ended the year strongly by posting a small gain during December. For the month, OTC volume rose to $377.6 billion versus $375.8 billion the previous month. In its exchange traded Click 365 division, volumes continued to fall as the unit reported $7.6 billion, an 8.5% decline from November. However, with larger margins available from its OTC business, the exchange traded Click 365 division is less marketed by the broker.

Overall volumes were slightly higher for the month, as December became the broker’s second best month of the year.The strong end of the year volumes follow similar results from the TFX which reported a small decline, but continued to see an increase in Yen trading activity. So far during 2013, we have seen reports of a strong end of the year from reporting venues even as other asset classes experienced a drop in volume due to the holiday season. 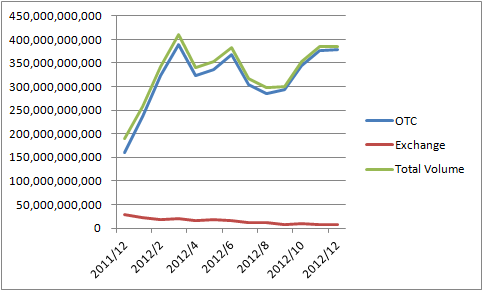 Share this article
Tags: brokers / tfx
Got a news tip? Let Us Know