GAIN Capital Holdings, Inc. (NYSE: GCAP) has published its monthly metrics for June 2016. Both the retail and institutional trading volumes were up from the month of May 2016, as per an official statement.

The institutional side of the business continued to perform strongly, with a healthy 40.1% MoM increase in ECN trading volumes, which came in at $212.3 billion for the month of June 2016, netting average daily volume (ADV) of $9.6 billion, an increase of 17.9% from June 2015. The ECN volume presents the amount of spot FX and non-deliverable forwards (NDFs) trading executed through GTX platform. 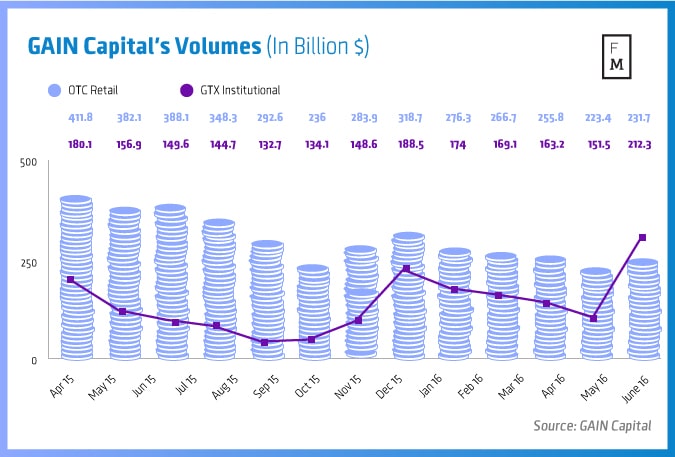 Meanwhile, swap dealer average daily volume came at $2.4 billion, a decrease of 15.5% from May 2016 and 8.9% from June 2015. The total swap dealer volumes, which includes spot, forwards, swaps, options and non-deliverable forwards executed by GAIN Capital’s registered swap dealer, was $53.4 billion.

Commenting on the recent metrics, Glenn Stevens, CEO of GAIN Capital, said: “The lead-up to and market reaction following mid-June’s Brexit referendum led to an increase in volatility which resulted in GAIN’s Q2 2016 retail revenue per million tracking roughly 10% above our Q1 2016 levels.”