According to the broker’s annual report for 2014 filed by Dukascopy Bank, the company experienced a slowdown in revenues and marked lower profits last year. At a time when a number of big brokers have already diversified their offerings away from foreign exchange, Dukascopy played a relatively slow catch up in 2014 with the launch of its own CFDs products.

As volatility in foreign exchange markets waned during the first half of the year, the recovery towards the end of the year wasn’t enough for Dukascopy to get back on track with its operating results.

While there is no specific information about the reasons, we could guess that the figure is related to the new products which the company rolled out in 2014, namely binary options and CFDs.

Another interesting point to mention is that despite rising costs, the average number of full time employees has dropped materially from 2013. While the total workforce figure stood at 213.8 in 2013, it got slashed by 20 percent to 172.1 last year

Bottom line, the results of Dukascopy Bank were much leaner than in 2013. Gross profit amounted to CHF 1.3 million ($1.29 million) which is lower by 76.8 percent when compared to the full year 2013.

With the first half of 2014 being particularly difficult for the broker, a case can be made that weak financial performance or the delay in launching CFDs when compared to industry peers led to the departure of the company’s former CEO Alain Broyon.

In its 2014 annual report, the Swiss brokerage also published a post-SNB statement, “The Swiss National Bank’s decision to abandon the 1.20 peg on the EUR/CHF exchange rate has been followed by a large and sudden move. Effective risk management measures implemented by our bank have successfully limited the impact of this event on Dukascopy and its clients.”

“Although Dukascopy decided to compensate negative balances which appeared on some client accounts, Dukascopy Bank did not suffer any relevant loss in relation to this exceptional event,” the SNB-related statement concludes.

While the company states in its annual report that it has 21.9 percent more client deposits, according to balance sheet data its liabilities to customers have only grown 3.6 percent to a total of CHF 103.2 million ($102.6 million). 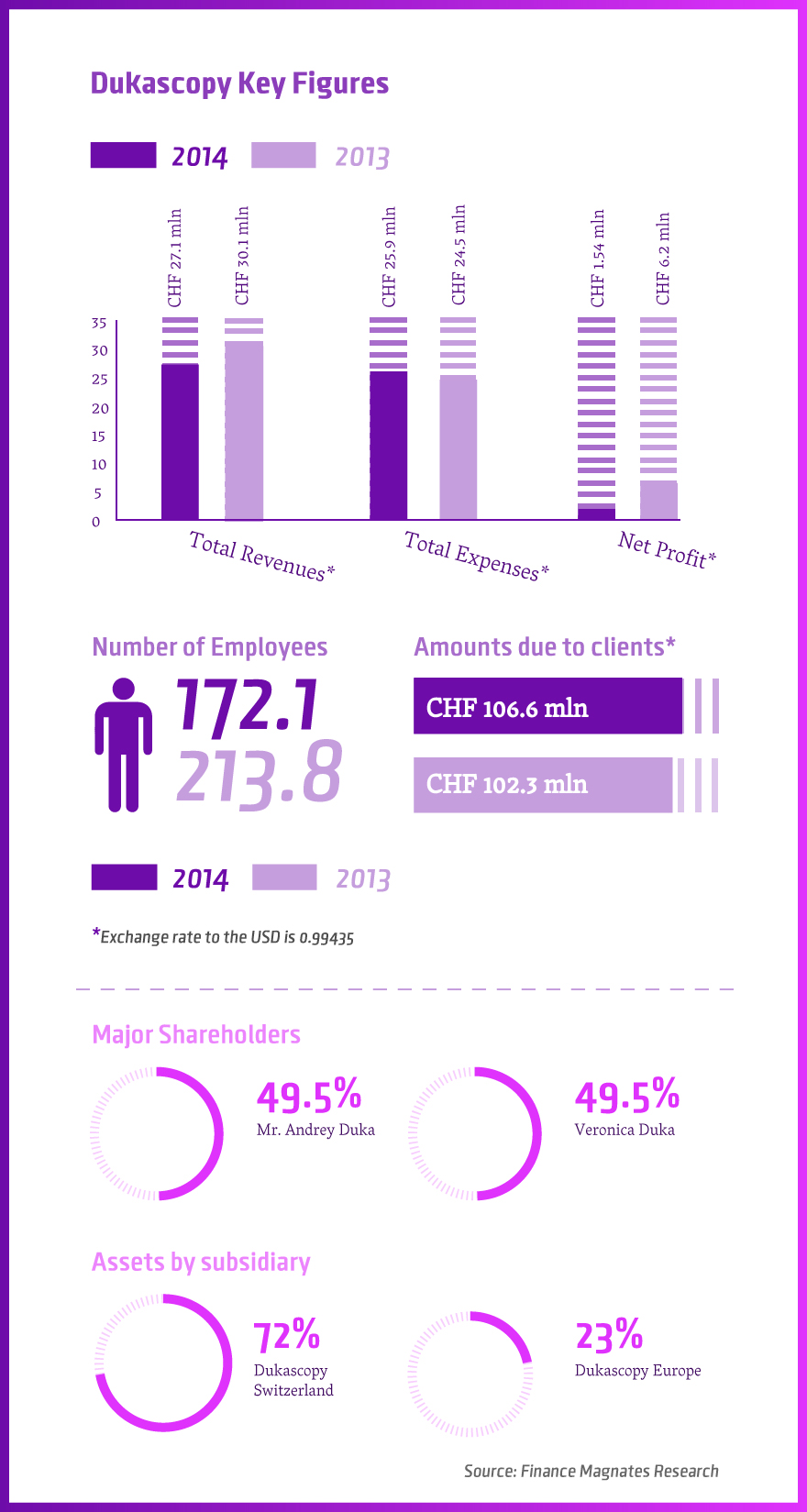 The full details of the annual report can be found below:

Share this article
Tags: Dukascopy / dukascopy-bank
Got a news tip? Let Us Know