Earlier in the week, Forex Magnates reported on the tough 2012 experienced by CMC Markets in 2012. For the fiscal year ended March 31st, 2013, CMC Markets reported a pre-tax loss of £2.8 million on a 21% decline in revenues to £129.1 million. The revenue shortfall was similar to figures seen from other major brokers during 2012, such as Saxo Bank and FXCM, as trading volumes dropped on falling volatility. Following up with CMC Markets, CEO Peter Cruddas, told Forex Magnates that despite the bottom line loss, the firm reported EBITDA of £14.1 million. Cruddas explained that “A major contributor to the statutory loss was the amortisation relating to historic software development expenditure, plus the preparation involved to launch our Next Generation trading platform to our remaining offices in Continental Europe and Canada.” He also added that “The year ended March 2013, has really been focused on building a base for the future of the business and ensuring that the business is consistently profitable even in challenging markets.”

So what about that future?

Not surprisingly, like most of the industry, CMC Markets has stated that 2013 is rebounding for them. In terms of their Next Generation platform, according to the broker, the system is delivering “improved profit margins and operational cost efficiencies”. What is interesting about the platform is the firm’s focus on mobile.

Written about earlier in year, when CMC Markets deployed an update to its proprietary Next Generation trading platform, it was called the broker’s “biggest ever” upgrade. The major features were a focus on mobile trading with chart and screen size optimization for iPads, pattern recognition software, integrated client sentiment tools and social media integration. During a smaller upgrade in July, CMC implemented an overall mobile friendly change that made the platform more adaptive to smaller screen sizes. At that time, Forex Magnates pointed out the firm’s focus on its enhancing its proprietary platform, in contrast to launching MetaTrader 4 like several of its rivals.

Beyond simply the focus on developing its proprietary platform and the operational efficiencies in-house systems provide brokers, CMC Markets is making a bet on mobile. Answering our inquiries about mobile uptake, Cruddas stated that “We’ve consistently seen 31% of trades transacted on mobile devices which equates to approximately 34% of our total Next Generation trade turnover this financial year. That figure peaked at 37% in August.” More than the fact that a third of volumes are mobile originated, the revealing part of the statement is that with 31% of trades and 34% of turnover, transaction sizes on mobile are outpacing those of desktop. This contrasts with data reported by multiple brokers in 2012, which showed rising adoption, but smaller transaction sizes for mobile. On this point, Cruddas explained that “Yes, we would say that this does indicate that our clients have embraced trading on mobile devices.” He added that “Our development team doesn’t think of our mobile apps as just bolt-ons to the web-based desktop platform. We know how important they are to our clients’ everyday experience, so we’ve dedicated development resources to work on them as stand-alone platforms. So, in many cases there is no need to trade via the desktop depending on the client’s personal preference.” 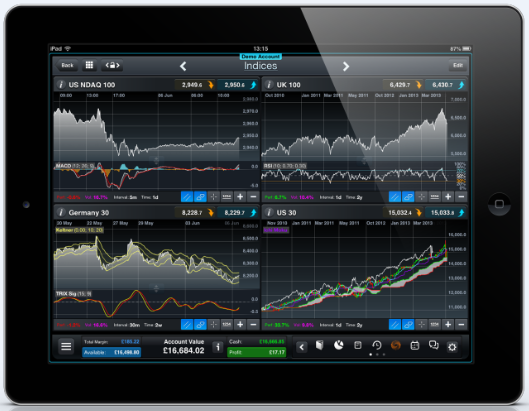 Sounds like the way to go to me. I don’t do automated trading so have never used MT4, but the discretionary trading I do is mostly initiated from my iPhone. Here in the Japanese market a lot of brokers are constantly upgrading their mobile offerings.

No doubt brokers must love traders who use MT4 for the volume it generates though.

Sounds like the way to go to me. I don’t do automated trading so have never used MT4, but the discretionary trading I do is mostly initiated from my iPhone. Here in the Japanese market a lot of brokers are constantly upgrading their mobile offerings.

No doubt brokers must love traders who use MT4 for the volume it generates though.