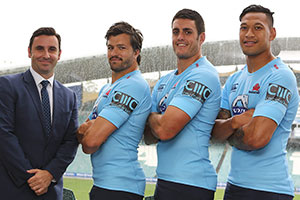 The New South Wales (NSW) Waratahs have announced that CMC Markets is extending its sponsorship of the team with an upgraded two-year package. CMC Markets will now become sleeve sponsors on the NSW Waratahs home and away jerseys.

The upgrade comes as the Waratahs enter their 25th anniversary year which could be expected to provide the team more exposure throughout the upcoming season. Possibly more important is that the Waratahs are coming off their best ever campaign, as they took the top spot in the regular season standings and followed it up by winning the league’s final match to become Australian Super Rugby Champions.

For CMC Markets, Australia is one of the firm’s most important markets where it heavily markets its CFD and stock brokering services and is believed to be among the top five brokers in the country. The current Waratahs sponsorship began with the 2014 season, with the team’s championship ultimately relating good timing on CMC Markets. Overall, the deal continues a growing trend of forex and CFD brokers that have partnered with sports teams to enlist their help in increasing their brand image around the world.

Commenting about the extension of their sponsorship, Matt Lewis, Head of CMC Markets Asia Pacific, said: “We’ve worked closely with the Waratahs team and management over the past year, and as we collectively look to expand our relationship in 2015, this new agreement will only serve to cement the fantastic partnership that exists between the two brands.”

CEO of the NSW Waratahs, Jason Allen, added, “To gain further commitment of an international blue chip company of the calibre of CMC Markets really demonstrates the success NSW Waratahs has achieved over the past seasons, and it is a great outcome for rugby in NSW.”

Share this article
Tags: Australia / brokers
Got a news tip? Let Us Know