Gain Capital posted record quarterly and full-year revenues last week, as top-line Q4 revenues grew 37% from 2013’s Q4 to $114.7 million. Net income was 309% higher at $17.6 million. Driving revenue was a mix of growth in the broker’s retail FX and CFD brokering, its commission-based institutional and futures businesses, as well as the closing of its acquisition of GFT. Today we take a closer look at the firm’s results and analysts conference call.

With their acquisition of GFT in 2013 being finalized at the end of that year, GAIN Capital’s 2014 financials rose as they reflected results from the merged companies. The bottom line benefits though came from cost saving synergies achieved following the deal. As a result, fixed operating expenses of the combined companies fell from $181.7 million for 2012, the last full year before the merger, to $128.6 million. The $53.1 million decline in fixed expenses was attributed by GAIN to be synergy related and above their $35-$45 million target.

While exceeding synergy expectations, where GAIN underperformed was in its EBITDA as a percentage of revenues. For the full year 2014, EBITDA was 20.2% of revenues. This figure was below 2013’s 22.7% results, and more importantly, below the 26% rate GAIN achieved in the first nine months of 2013 before GFT was acquired. However, the broker did achieve a 31.3% rate for Q4 2014. As a comparable quarter with similar volatility, during Q2 2013, GAIN achieved a 36.8% EBITDA-to-revenue rate. Overall, 2014’s figures illustrate that despite achieving cost reductions from the merger, profit margins are lower for the combined brokers than before GAIN had acquired GFT. However, the profit rates are well above what GFT had earning previous to the merger.

While GAIN doesn’t break down its retail revenues based on brand, they did publish that revenues from GFT’s Sales Trader division rose to $54 million in 2014 from $10.4 million in 2013. The product is GFT’s institutional trading offering and is included within GAIN’s commission-generating units. The growth illustrates that GAIN has successfully been able to increase its institutional market share. 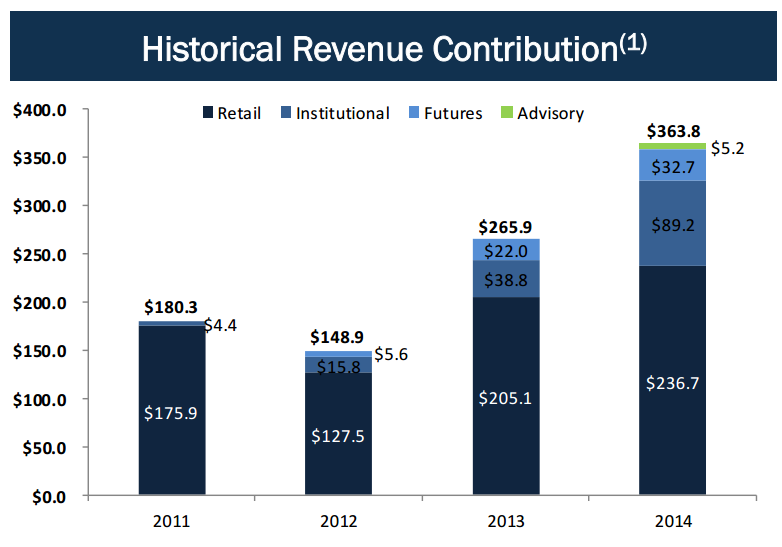 The lack of much retail growth is important to consider as GAIN announced last October that it is acquiring City Index. Similar to the GFT acquisition, GAIN expects to achieve $45-$55 million in synergies from expense costs. The deal is still pending regulatory and shareholder approval, with an expected closing in Q2. Nonetheless, with City Index’s revenues primarily retail based, the success of the deal comes down to whether GAIN will be able to hold onto existing customers and marketing partners. If the GFT deal is any indication, retaining partners and clients does become more difficult when a large brand is acquired and no longer operates as a standalone entity with its own image.

RPM – Retail revenues per million (RPM) dollars traded increased to $116 during the volatile quarter and was a high for the year. The figure compared to $120 in Q4 2013, when overall RPM exceeded that of 2013. While related to volatility, the overall lower trend in RPM may also be a result of GFT’s client base being less profitable than that of GFT.

Swiss franc – Overall GAIN Capital CEO Glenn Stevens related that the firm had little exposure to the Swiss franc’s volatility in January. They had already reported that they had a profitable day on the January 15th Black Thursday and forgave customer negative balances. During the conference call they added that they are benefiting from the event with new client figures rising. In terms of negative balances, Stevens said that 90% of the negative balances came from a few accounts that “you could count on two hands.” Overall negative balances were around $2.5 to $3 million.