October proved to be a relatively active month for trading in currency markets, ultimately paring last month’s declines in volumes. The EUR was the big mover in terms of volatility and volume, helped by developments within the bloc. Consequently, the EUR/USD saw a double digit (10 percent) increase in turnover on a monthly basis, helped by its steady erosion in October off of highs in the month prior.

The total turnover in October 2017 at Alpari was reported at $121.6 billion, up 6.3 percent on a month-over-month basis from $114.4 billion in September 2017. The reading is also Alpari’s highest aggregated turnover figure in 2017, beating a previous high of $120.8 billion back in August 2017. The increase during October also reverses a pullback seen in September, continuing Alpari’s yearlong trend increase in FX turnover.

Delving deeper into October 2017’s volumes, a high level of trading activity was also attributed to the GBP/USD and USD/JPY pairs, as well as its PAMM account services. Another factor that has helped strengthen Alpari’s trading volumes in recent months is the uptick of activity from clients in South Asia and the Asia-Pacific (APAC) region. 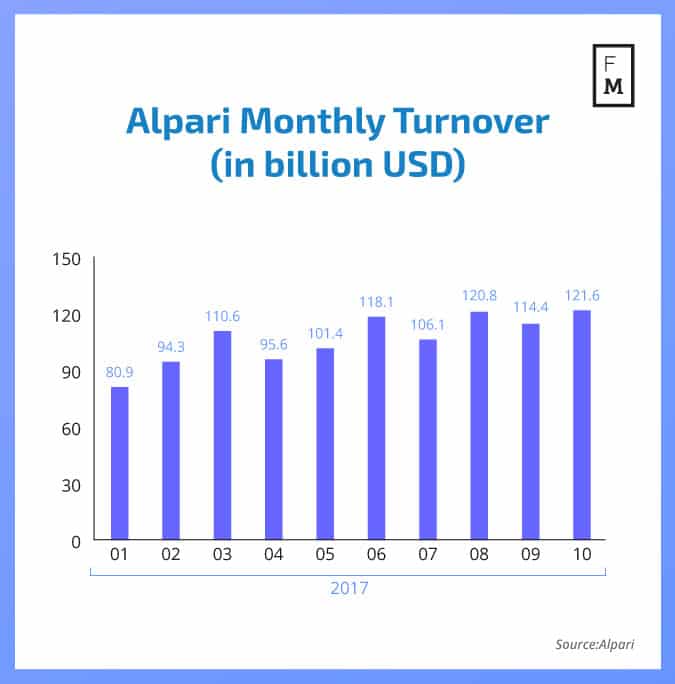 Looking ahead, a number of factors will continue to drive markets leading into years’ end, namely in terms of political ramifications in Europe and the US. In Europe, Germany could be headed towards new elections after its coalition appears to be finished. Economic strength in the US has recently helped propel the USD, reversing its steady decline earlier this year. Any developments surrounding the prospect of new tax legislation could also instigate action across currency markets.