Silver futures have risen dramatically in April, as the combination of improved investor sentiment, a weak dollar and stronger Chinese data continue to support the grey metal.

Silver for May delivery closed up 8 cents or 0.5% at $16.98 a troy ounce Friday, April 22. Silver futures closed at $17.18 earlier in the week, which was the highest settlement on the Comex division of the New York Mercantile Exchange since last May.

The grey metal, which has gained nearly 10% in April, has experienced higher demand throughout the year. Silver futures are up 23% year-to-date, outperforming gold by a significant margin. Gold futures settled down more than $20 at $1,230.00 a troy ounce Friday after trying for one-week highs.

The gold-silver ratio, an important indicator of the precious metals’ relative value to one another, has declined significantly in April. The ratio closed down nearly 6% at 72.72 on Friday. This essentially states that the price of gold is around 72.72 times the price of silver. The ratio was as high as 83.5 in early March. 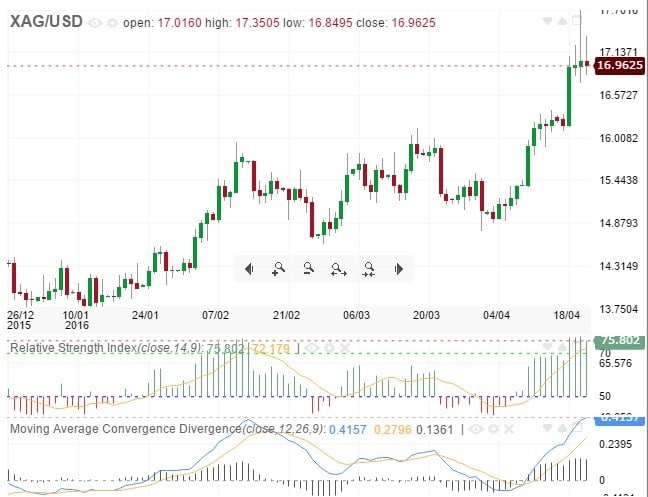 Analysts expect gold’s premium over silver to continually decline in the short-term amid growing signs that the yellow metal is approaching its peak for the year. Additionally, silver is benefiting from improving factory data out of China, which is the world’s biggest consumer of base metals.

China’s gross domestic product expanded 6.7% annually in the first quarter, the weakest rate of growth in seven years. However, government PMI data has shown sustained improvement in the country’s manufacturing sector. China’s official manufacturing purchasing managers’ index improved to 50.2 in March from 49 in February on a scale where 50 separates expansion and contraction.

A weak US dollar has also underpinned the latest rally in precious metals. The dollar index, which tracks the performance of the US currency against a basket of six peers, has declined nearly 4% since the start of the year and was recently seen trading near six-month lows.

A slowing US economy and financial market instability have forced the Federal Reserve to delay raising interest rates. Fed Chairwoman Janet Yellen confirmed last month that the central bank would adopt a cautious approach to policy normalization, which effectively rules out a rate-hike before mid-2016. According to the CME FedWatch Tool, the Fed is unlikely to raise interest rates before the November presidential election. As such, loose monetary policy will likely keep a lid on dollar gains, which could help silver extend its recent rally.

However, analysts at Goldman Sachs have warned that the latest rally in commodities, which includes precious metals and energy, is not backed by fundamentals.

“While this recent rally has the potential to run further to the upside … we believe that it is not yet driven by a sustainable shift in fundamentals,” Goldman analysts said in a note released on April 22, as quoted by Reuters.

They added: “Given the near-term and temporary nature of the current re-balancing and the lack of longer-term sustainable deficits in any of the markets, it is premature to embrace these ‘green shoots’ and shift to an ‘overweight’ recommendation in commodities.”