Oil prices are mired in their worst losing streak since the start of the year, as a growing glut of gasoline and distillate inventories continue to weigh on the market.

West Texas Intermediate (WTI) for September delivery fell to fresh three-month lows on Tuesday, reaching a daily low of $42.60 a barrel on the New York Mercantile Exchange. Since June 29, the futures price has plunged more than 14%.

The outlook on crude has deteriorated over the past four weeks as oversupply concerns crept back into the picture. The market may be oversupplied with crude oil, but it is even more awash in gasoline. That has market investors worried about another precipitous decline in energy prices over the next few months.

Experts warn that gasoline inventories are 10% higher than where they were a year ago. This figure is expected to hold steady and could increase since US refineries continue to produce more gas than the market can possibly consume.

While crude oil inventories have declined every week for the past two months, distillate stockpiles have risen unexpectedly. Distillates inventories are expected to rise even more in the short-term as refineries continue to operate at high levels.

What’s more, US rig counts have risen steadily over the past month, a sign that producers are coming back online now that the worst of the price collapse has ended.

Profits for oil and gas companies continue to suffer. The latest earnings report from London-based BP plc showed a 44% plunge in quarterly profits. The company has already slashed tens of thousands of jobs in its United Kingdom operations alone.

Oil prices are also feeling the pressure from a stronger US dollar, which recently hit more than four-month highs against a basket of world currencies. The dollar index spiked above 97.00 last week after a string of better than expected economic data raised the outlook on the world’s largest economy. Data on retail sales, industrial production, housing sales and even manufacturing have all surprised to the upside.

Cheap oil has also weighed on commodity-driven currencies like the Canadian dollar, which recently plunged to four-month lows against the greenback. The USD/CAD exchange rate recently hit 1.32 for the first time since March. 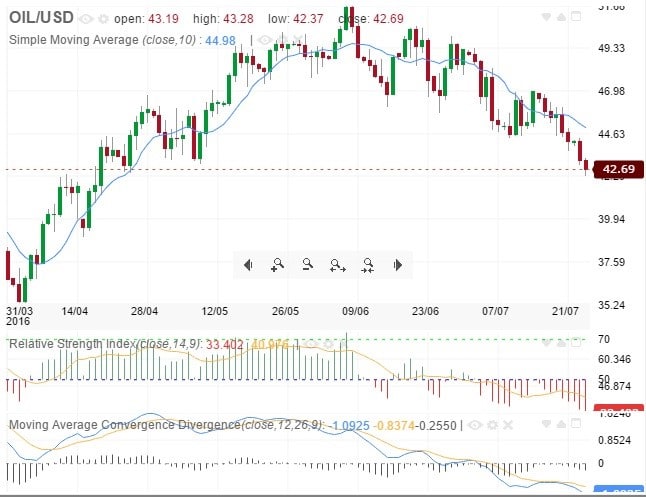 A firm dollar has not only weighed on oil, it has undercut the precious metals rally. Gold prices are down nearly $50 from their August high. Silver prices are also trending lower after hitting consecutive two-year highs.

While we have strong reason to believe that the worst of the oil-price collapse is behind us, the short-term outlook remains tilted to the downside.

US financial services company Morgan Stanley has declared that the global market is “severely oversupplied” with gasoline, indicating that a “refinery-driven correction is upon us.” The firm says the latest rout could send oil prices back to $35 a barrel as the market undergoes yet another painful correction.