This araticle was written by Evdokia Pitsillidou, Risk Management Associate at easyMarkets.

Gold’s premium over silver has improved this month, as the grey metal fell sharply from two-year highs amid renewed dollar strength.

The gold/silver ratio used by investors to determine when to buy and sell precious metals closed at 67.45 on Monday. This essentially states that one ounce of gold is worth 67.45 ounces of silver. The ratio was plunged to around 66 in early August after silver broke new multi-year highs.

Since closing at $20.71 a troy ounce on August 2, silver futures have declined 4%. The outlook on the grey metal remains favourable, but analysts warn that choppy conditions may continue as markets react to changing risk sentiment.

Declines in gold have been less dramatic in August. Gold for December delivery, the most actively traded futures contract, has declined about 1.8% from the August 2 high of $1,372.60.

Gold’s premium over silver has held relatively steady over the past 30 days. Projecting out to the previous 60 days, we see a decline in the ratio of more than 9%, reflecting silver’s massive gains earlier this summer. 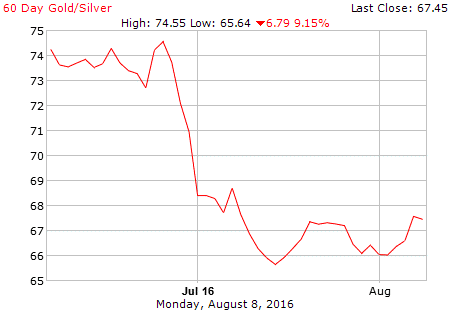 Silver is easily the best performing major commodity of 2016. The grey metal has gained more than 40% since the start of the year on physical demand, risk-off trading and continued low-rate stimulus by the Federal Reserve, European Central Bank and Bank of Japan. In the case of the latter two, negative rates have supported expectations for continued monetary easing.

The Bank of England became the latest central bank to ease monetary policy, as officials sought to address negative growth risks stemming from the June 23 Brexit vote. The BOE slashed interest rates to 0.25% and expanded their bond purchasing program by a combined £70 billion.

Despite their recent strong performance, gains in precious metals have certainly not been linear. That’s partly due to a volatile US dollar, which normally trades inversely with gold and silver (which so happen to be priced in greenbacks). The dollar index reached a more than four-month high at the end of July before plunging on weak second quarter GDP data.

The US economy expanded at a disappointing 1.2% annualized pace in the June quarter, less than half the rate forecast by economists. This immediately prompted traders to lower their bets that the Federal Reserve would lower interest rates this year. While expectations have picked up since, the likelihood of 2016 rate hike is well below 50%, according to the Fed Fund futures rates.

The outlook on precious metals continues to be choppy in the near term. With market volatility near two-year lows and stocks continuing their uptrend, demand for risk-off assets appears to be lower at the moment. However, it’s important to keep in mind that both metals are benefiting from higher average daily volume. Precious metals remain a highly liquid market, so anything may happen.