Going into today’s US Fed Meeting, the financial markets have been assuming that today, after nine years, may finally be the day that the Fed finally raises rates. They’ve been talking about it possibly being around the corner since 2012, but have yet to pull the trigger.

Raise Rates: The theory here is the Fed and Chairwoman Janet Yellen telegraphed earlier in the year, and most recently in July, that the US economy was improving and employment was rising. Unlike in the Bernake days when he cited a weak housing market as the albatross that was keeping the Fed from raising rates regardless of the rest of the market, Yellen hasn’t been shown to have a specific sector that is dragging down her overall view.

Sit Pat: On the other hand, since July’s Fed Meeting and Yellen’s economic testimony to congress, the US stock market went through a correction. In addition, as covered earlier in the month, other central banks such as the Bank of England have held back from raising rates this month. Therefore, the Fed may not want to rock the boat and follow along with consensus and wait for at least one more meeting to analyze how the summer’s stock market downturn is effecting the overall US economy.

QE4: A new round of quantitative easing (QE) can never be ruled out with the Fed’s existing track record.

Currently, futures prices are pricing a 30% chance of a rate hike (see below). Let us know what you think in the comments 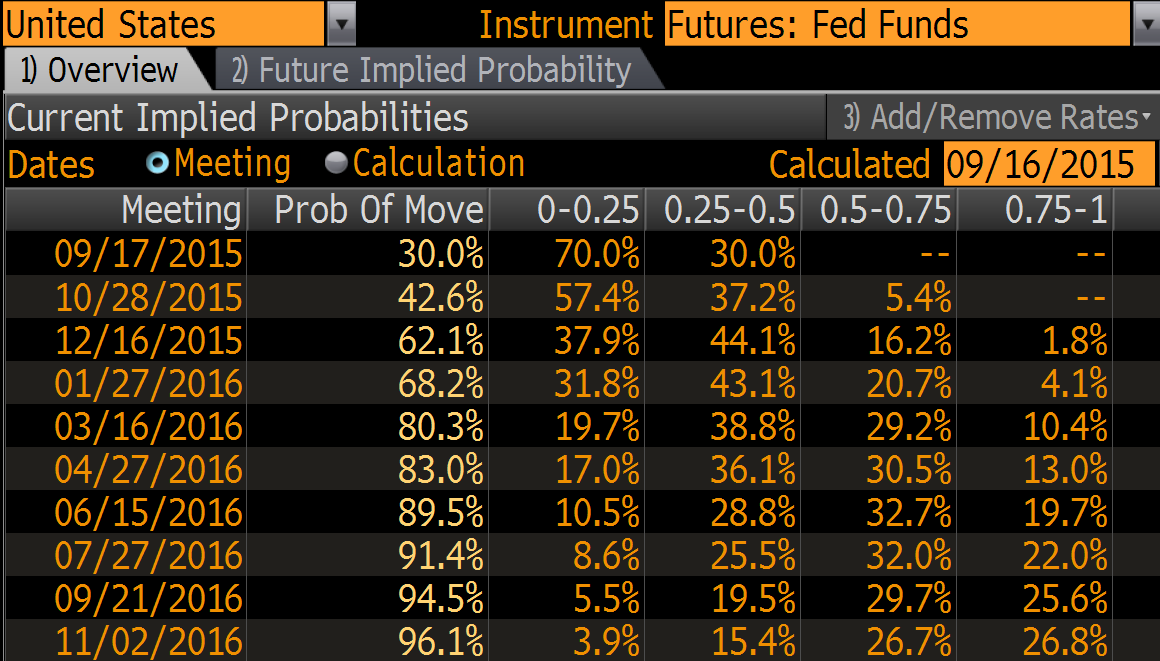 Share this article
Tags: fed
Got a news tip? Let Us Know

Surely whichever way Yellen plays it, the market reaction will be positive?
The only way markets would react negatively would be if Yellen raised rates by 1%???!

@David – I think it also comes down to whether traders understand Yellen and the Fed’s comments to mean that we will get to 1% and above sooner rather than later. Back in June 2000 when Greenspan raised rates to combat ‘irrational exuberance’ after the first leg lower of the dot com bust, the market rallied since it was believed (incorrectly) to be a one-time move. I doubt Yellen will signal any sort of aggressive rate hikes, but if she does, it could spook people.