Yesterday was a quiet day on the news front with the markets awaiting last night’s FOMC rate decision and press conference. But for the sterling there was a lot of event risk with the latest labour market data, monetary policy Committee minutes, the UK Chancellor announcing to parliament the last budget ahead of May’s general election.

The GBP sold off across the board yesterday morning following a higher than expected unemployment level of 5.7% against expectations of 5.6%. Hitting an almost 5-year low against the dollar.

There was in fact a slight improvement to 5.66% if we include the second decimal place and edge closer to the Bank of England’s estimate of the medium term unemployment rate of 5.5%. Employment stands at a record high of 30.9m with the claimant count still declining,  indicating lower unemployment going forward. 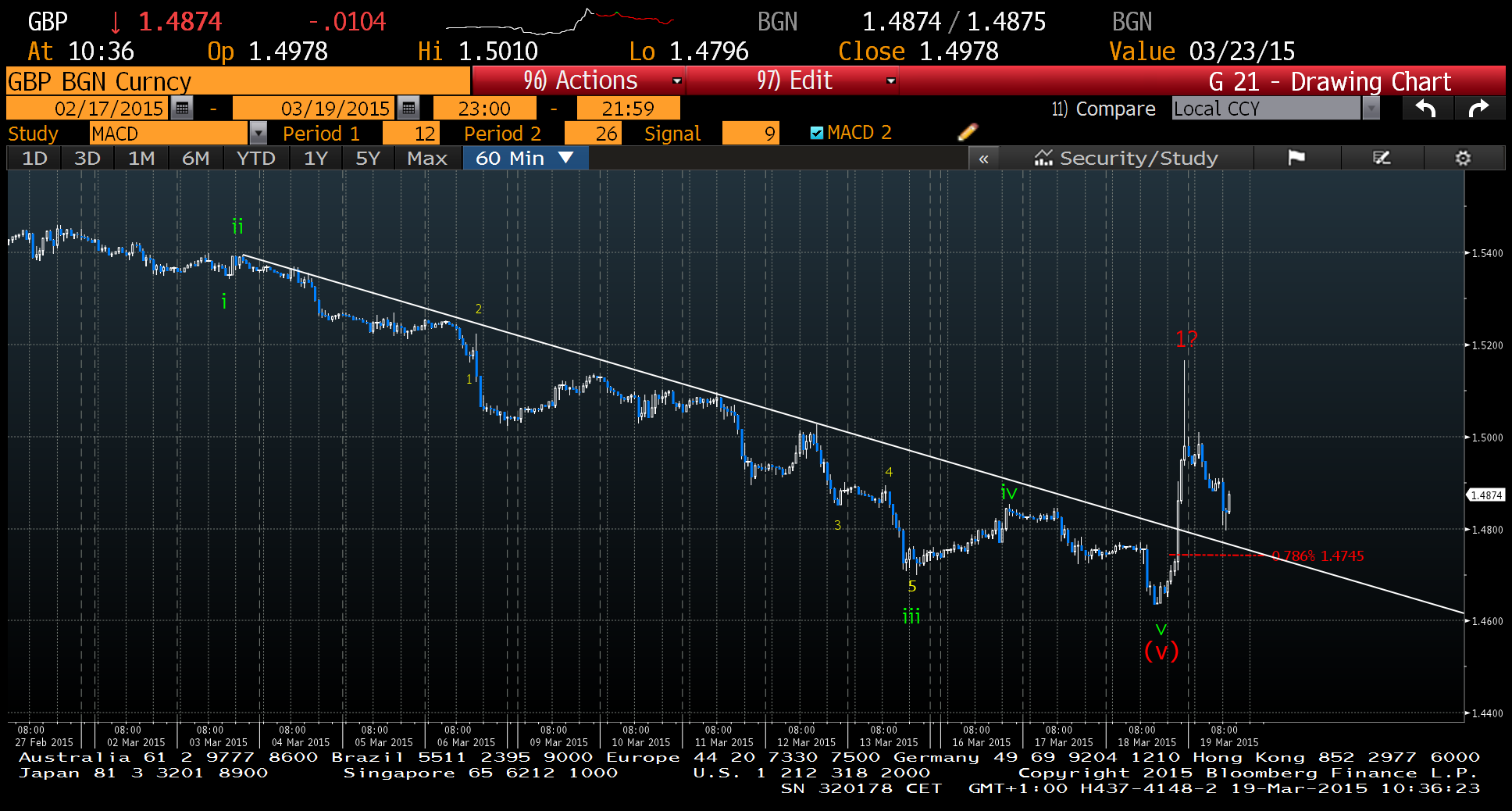 The average weekly earnings also disappointed with a second consecutive monthly decline excluding bonus to 1.6% in January. This highlights like in the US (although the market ignored the bad wage numbers from the unemployment report earlier this month) that wage growth remains subdued. However, if we take into account the low inflation then there was actually positive real wage growth which should lead to an increase in private spending and help with the UK recovery. The market however interpreted these figures as evidence that the UK can put on hold any rate rise for now.

Like a heavyweight boxer, the pound was hit with a double punch as the Bank of England released the minutes from its March meeting sending the GBP/USD more than 100 pips lower before finding a base ahead of the FOMC as the Monetary Policy Committee voted unanimously in favour of keeping the bank rate unchanged at 0.5%. They repeated that low headline inflation was mainly due to the fall in oil and food prices.

But the most important thing we learnt from the minutes was that the MPC was becoming more worried about the appreciation of sterling on a trade weighted basis. Whilst the GBP/USD fell against the dollar this year, it is up more than 3% on a trade weighted basis and the minutes stated ‘divergent monetary policy trends, as well as stronger prospects for growth in the United Kingdom than in the euro area, might continue to put upward pressure on the sterling exchange rate.

This had the potential to prolong the period for which CPI inflation would remain below the target and exacerbate the risk that lower expectations of inflation might become more persistent.’ GBP didn’t move much following George Osborne’s budget, U.K. government bonds climbed, pushing the 10-year gilt yield to a five-week low as the Chancellor paved the way for less debt to be sold than previously forecast by analysts. But the market was waiting for the FOMC and what a reaction we got.

The FED as expected removed the word ‘PATIENCE’, but saw any future rate rises slower and more gradual than the market expected in future, adding that they wished to see gains in inflation and jobs before lifting rates. The median FED Funds Rate for the end of the year dropped to 0.625% from the 1.125% seen in December, this being more dovish than expected.

Even though we were looking for July to be the earliest possible month for a rate rise, many in the market were looking for June and some were even calling for April following last month’s NFP numbers. Expectation have now shifted for a first rate rise to 23% probability in July and 43 % in September. Looking at the chart below we can see the initial reaction took the GBP/USD from a low of 1.4714 to 1.5166 over the next 2 hours.

Those of you who have been following us know that we have been looking for a multi -week/multi-month retracement in the dollar across several currency pairs and this impulsive rise could well signal the start of that. After such a strong rally we are not surprised to see some pull back with a move of three waves clearly seen. We would look for a bottom to start forming and we need to stay above the 1.4630 lows, preferably above the 0.786% retracement at 1.4745 for the next leg higher.

Share this article
Tags: eur / traders
Got a news tip? Let Us Know