2021 brought about the end of the Brexit transition period, finally confirming the UK’s exit from the EU. The changes also affected companies operating in the financial markets, including the retail FX/CFD sector, brokers, and their clients. Market experts wonder which jurisdiction can take over from the city of London as the trading capital in Europe and the most common bets include Cyprus, Malta, Germany, and France, but CEE countries may further benefit due to their low costs of managing a business.

In the latest edition of the Quarterly Intelligence Report, Finance Magnates Intelligence examines which representatives of brokerage firms directly involved in European operations think about the changes that may await the market as the Brexit transition period ends.

According to the survey, industry experts believe Cyprus, which is already the leading and most popular licensing jurisdiction for brokers looking to locate in Continental Europe, stands to gain the most from the changes (35%). Exactly 24% of respondents believe that Malta will take over a large part of the brokerage business, followed by Germany (16%) and France (13%). The last piece of the brokerage pie is expected to be filled by the CEE market, with Poland, among others being mentioned. In contrast to other EU countries, Poland offers an additional category of retail clients with a higher price-to-book ratio.

“I do believe Cyprus and Malta have a lot of potentials; however, it all comes down to the fine balance between protecting client interests and leaving some freedom to the brokers. Whoever does this best, ultimately wins,” Natalia Zakharova, Head of Sales at FXOpen, said. 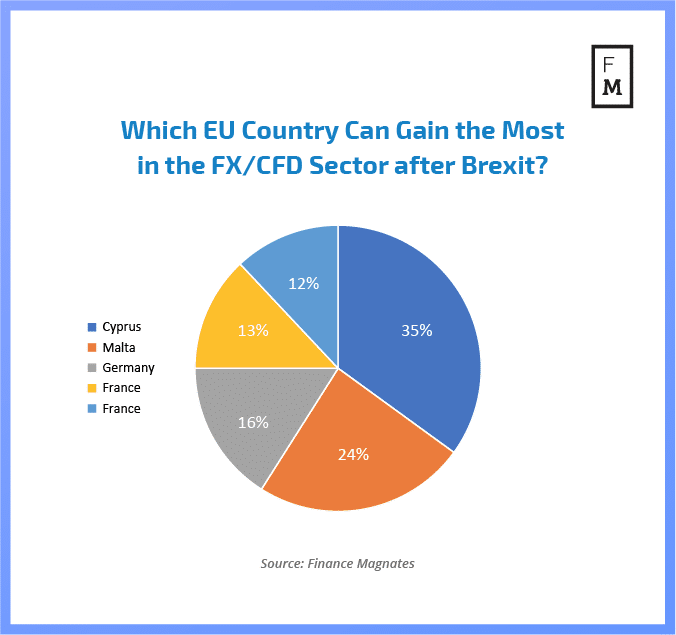 London’s Dominance Is Diminishing, but Forex Hub City Is Still Hard to Replace

Commenting on the possible end of London’s dominance, Graeme Watkins, CEO at Valutrades Limited, said: “I don’t think this is the case at all. London has 200 years of history as a financial center. Having a UK FCA license and offices in London is still a sign of credibility that is valued in many parts of the world, not just Europe. Brokers will indeed move some of their business to Europe, but so far I have not seen anyone closing down their UK entities, and I believe the interest is still to have both the UK and European license.”

London’s weakening position in the FX market trading was confirmed, among others, by the triennial report published in August 2020 by the Bank of England. Daily foreign exchange trading volumes in London have shrunk by 16 percent from the prior year to $2.41 trillion in April 2020. The decline in the average daily volume in the city was broad-based and was reported across almost all currency pairs, instrument types, counterparty types, and execution methods.

Regardless of location decisions and regulatory changes, due to the lack of passporting, the coronavirus volatility that fuelled record volumes and broker profits last year should continue into 2021.

To get the full article and the bigger-picture on the post Brexit EU industry, get our latest Quarterly Intelligence Report.