A survey conducted by BrokerNotes, a company that helps traders to compare brokers, seeks to throw out many of the myths and mysteries surrounding the trading industry. The results gathered point to how the dynamics have changed in the industry since the concept of online trading came into the picture, and how it has opened up the market to a wide variety of traders. It is clear that trading is no longer restricted to a specific group and has become largely democratized.

Asia Has the Highest Number of Traders

It may be a surprise to note that the largest number of traders are not in the Americas or Europe, traditionally the financial power centers of the world, but actually in Asia. Asia now has over 3.2 million traders as against 1.5 million traders in both Europe and North America and less than a million in South America. Even Africa, long considered an underdeveloped market, has 1.3 million traders. This data has been obtained by gleaning facebook data. 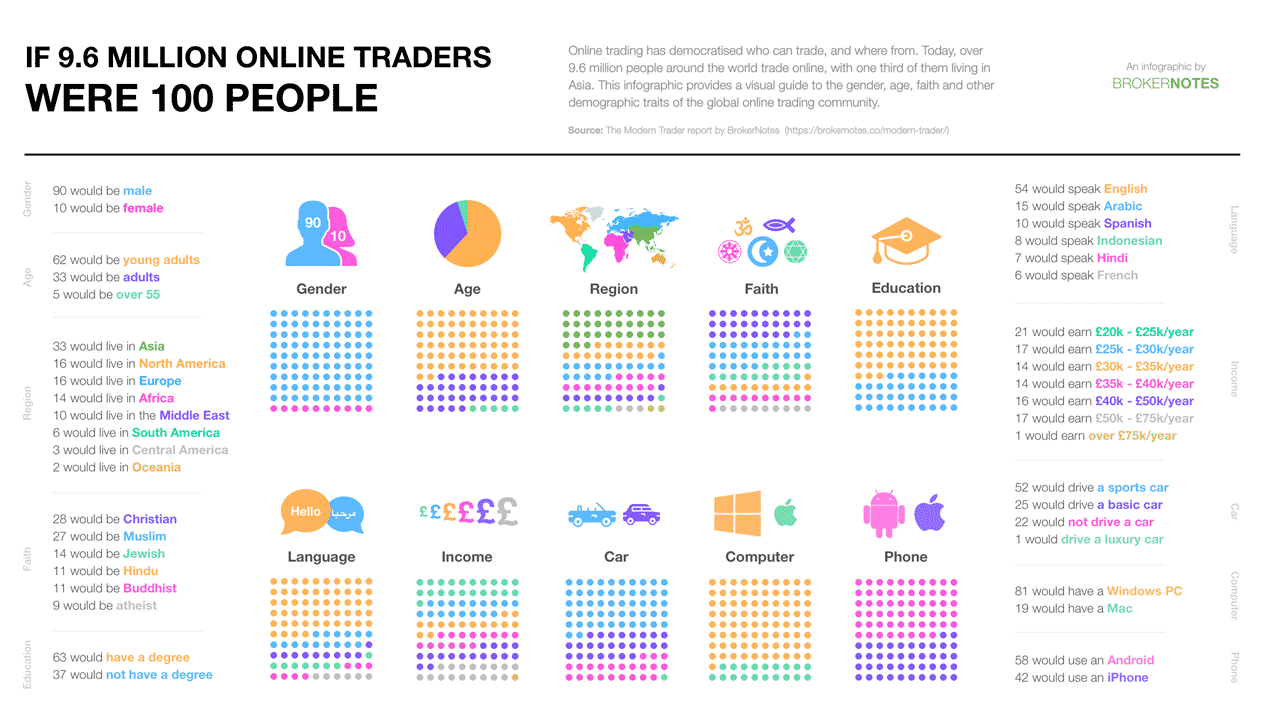 The UK has the highest number of traders in Europe, which is understandable considering its size and the fact that it is the financial center of Europe. But it remains to be seen what impact the Brexit process is going to have on these numbers a few years down the line.

Trading Gets Younger and Fancier

Another aspect, which is a clear indication of the impact of online trading, is the fact that most traders are under the age of 35 and prefer to trade cryptocurrencies as they require less capital to enter and are promoted aggressively online.

Female traders are also increasing in number, though they still constitute only 1 in 10 traders. However, they seem to have much more patience, helping them to achieve better returns while the hyperactive trading of males leads to a reduction of 2.65% in their returns per year.

And we reserve the best and the most surprising finding for last – the average trader earns only $49,400 (£38,000) per annum, blasting the myth that traders are high earning individuals living in posh mansions and driving away in luxury cars. In fact, less than 0.3% of UK traders own a luxury car.

It has to be noted that Brokernotes has conducted this survey using Facebook and web analytics as the data source with varying sample sizes. All this data points to how the trading industry has evolved over the years, and should help technology and platform providers to design their products and marketing strategies accordingly.