Two weeks ago, we awaited Janet Yellen’s speech at the semi-annual hearing where the fate of the word patience hung in the balance. With markets awaiting confirmation that the word ‘PATIENCE’ would be removed at the next meeting on March 18th and that the FED would remain data-dependant. The market was disappointed, but since the testimony the dollar has started to gain traction with markets continuing to focus on interest rate differentials. Following the better than expected Non-Farm Payrolls last week, many traders are looking to the FED to hike rates as soon as April, thus resulting in new highs for the Dollar Index.

Forex Magnates published an article on the 24th of February called ‘Yellen’s Yell Influencing the Yen` in which it said ……
‘’The longer term trend and structure remain firmly positive and any bullish dollar move in the coming days above the 120.50-85 level will confirm that the next leg higher in a wave 5 is under way. We would then expect the multiyear December high at 121.85 to break on its way to our long-term target and previous top of a major wave IV to both meet at 124.14.’’

Well, on Friday, following the stellar NFP numbers (although we believe the market will soon start to pay attention to the slow wage growth) the USD/JPY broke above the down trend line of the 4th wave triangle closing the week at 120.82. Yesterday our attention was drawn to the test of the seven and half year high which was taken out, printing a high of 122.03 before closing at 121.13. Although we didn’t close at the highs yesterday, looking at the MACD in the above chart we can see that it is trending higher above both the signal and the 0 line, showing bullish momentum. So we should look for it higher, but how far?

Looking at the longer term chart below, taking out the highs of wave 3 confirms that we are continuing higher in the wave 5 of 5. Bearing in mind the bullish MACD on the daily chart, we can see that on a weekly basis, despite new highs, it is bearish, showing us that any move up in USD/JPY should be limited. Combined with the fact that the daily is now in over bought territory, we might not stay up here for long.

A daily close above the 121.84 previous high should target the 123.55 level before targeting a test of the 12 and a half year highs and previous wave IV high at 124.13. A move above this will test the highs from the end of 2002 around the 125.60-80 level. Although we are looking for new highs in the USD/JPY we don’t expect it to trade too much further.

Any pull backs should be brought into in the coming days and this final bullish bias remains intact as long as we stay above the 119.80 level.

Although the sun hasn’t risen yet for the JPY, all indicators show us that sunrise is not far away. 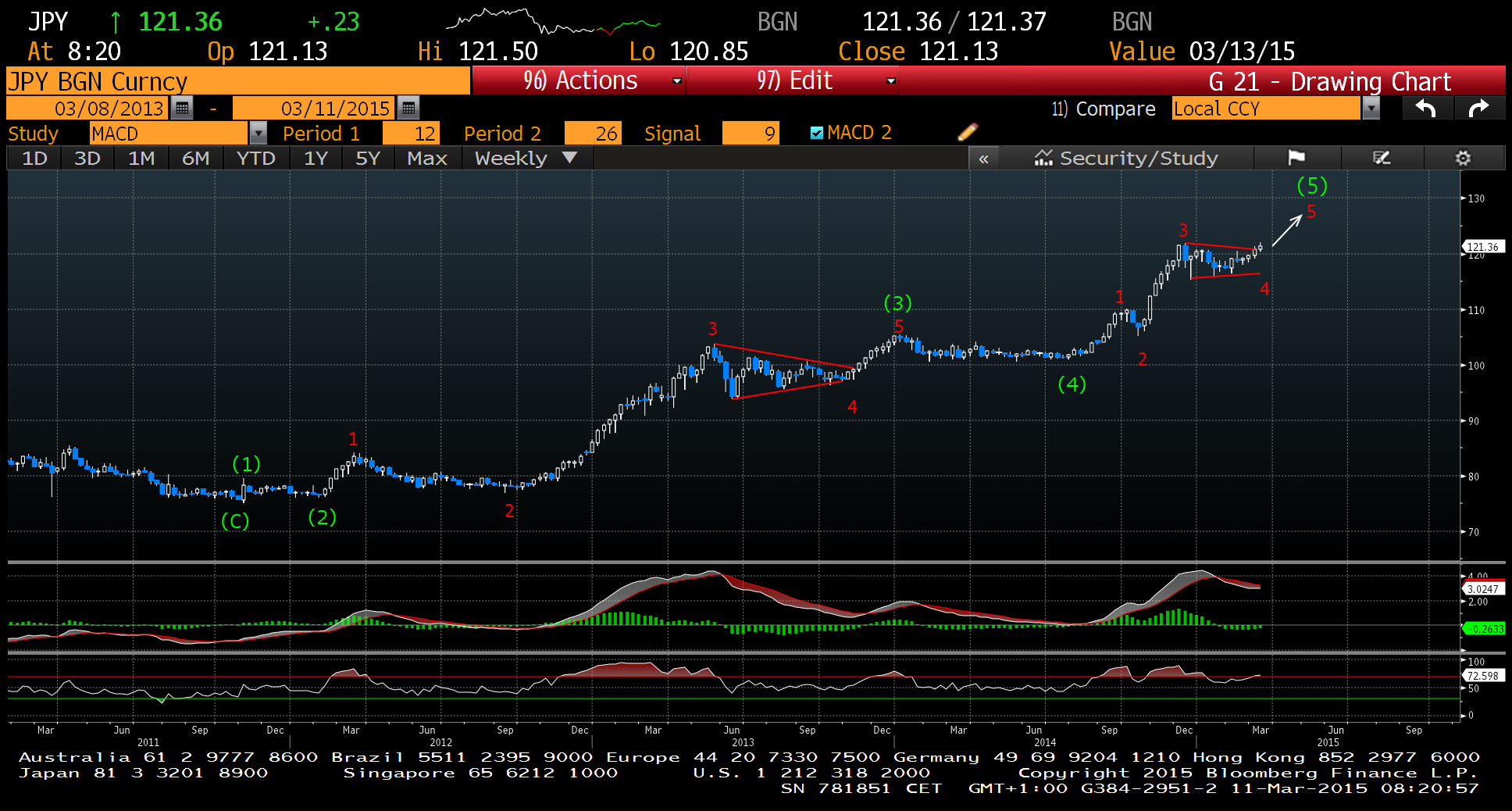 Share this article
Tags: fed / traders
Got a news tip? Let Us Know