The primary objective of the report was to examine the costs of trading, clearing and settlement in Australia. The report was published by a UK-based research company, Market Structure Partners, but was commissioned by a group of 10 Australian clearing participants – Citigroup, Credit Suisse, Deutsche Bank, Merrill Lynch, Morgan Stanley and Pershing Securities.

This report focused on the costs incurred directly by intermediary market participants, rather than end investor costs, as this was deemed be to be a more accurate indicator of trade costs. The report’s core finding is that “clearing and settlement costs in Australia are high when benchmarked across other global markets.”

Equity clearing and settlement in Australia were found to be the third most expensive in developed markets after Spain and Brazil. Looking at value and number of trades cleared vs the average cost to clear them, the report shows Australia as the second most expensive market after Brazil, even once economies of scale have been accounted for.

Authored by Market Structure Partners’ CEO, Niki Beattie, the report states: “Total overall transaction costs in Australia are higher than in markets where there is fully functioning competition in trading. Australia’s costs are more aligned with other markets where the exchange is the dominant market.” The report finds that countries with only a single central exchange tend to experience higher costs as a result of a lack of competition.

In comparison to US trading venues, Australia is lagging far behind in terms of diversity and cost-effectivness. According to MSP, it can cost 4 times more to execute a trade via the ASX compared to a rival US exchange. The United States continues to dominate the financial services arena with the most diverse, best capitalised and most cost-effective financial services in the world. 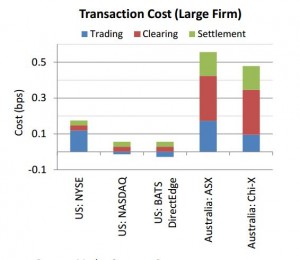 The MSP report follows closely on the heels of an alternative report by Oxera published in July 2014, finding “Australian Stock Exchange (ASX) costs are broadly within the range that financial market infrastructures (FMIs) of a comparable market size charge to investors with similar trading characteristics.”

The Oxera report went on to add, “ASX charges at the low end of the range of fees charged for Central Securities Depository (CSD) services and at the high end of fees for Central Counter-Party (CCP) services.”

Furthermore, the report highlights reasons for concern regarding how the ASX operates regarding defaults. According to the report, CCPs should “reserve  25% of their total minimum capital ahead of non-defaulting members within their default waterfall. ASX Clear is putting well in excess of that figure and is responsible for 100% of the readily available resources in the default fund.” Concluding, “This could encourage the wrong type of behaviour from market participants who do not then properly manage their own risk.”

The full report can be seen here

Share this article
Tags: Asx / equities
Got a news tip? Let Us Know