Launching recently is social finance app Invstr. Similar to TradeHero, which we wrote about in October of last year, Invstr offers a gamified version of trading to help users sharpen their investment skills and learn about the market. The app is part of a larger trend of lifestyle apps such as Waze and Zombies!Run that integrate gamification into their product with the inclusion of achievements and social sharing. In terms of Invstr, the goal of the gaming features is to create a fun environment for teaching financial and investing topics to novices, as well as creating a social trading community which can be leveraged to create crowdsourced market data. 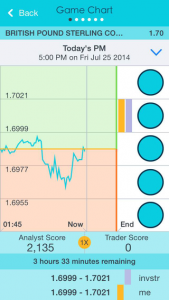 So what does the app do? Invstr includes free real-time pricing and news of stocks, indices and currencies, but the meat of the product is its games. Upon choosing a stock, players predict where prices will be in the future and based on their accuracy receive what is called analyst and trader points. When entering a prediction, also shown are user sentiment and price predictions of other app players on the network. The crowdsourced price predictions partially provide the app its social angle as well as create overall sentiment for users to compare themselves to.

The main social element of the app is the trading community features of the product. Users have the ability to connect with other users, comment on stocks and news ideas, as well as create private groups. In this regard, Invstr is a mobile version of the popular trading forums existing on many investing sites, but also adds social aspects like private messaging and groups within the app.

Headquartered in London, Invstr was founded by Kerim Derhalli, who had previously worked as a Managing Director at Deutsche Bank for over ten years before founding the mobile app startup in early 2013. Initially launched exclusively for the iPhone 5, the app is expected to become available soon to Android and tablet users, as well as for the web.

Share this article
Tags: ios / traders
Got a news tip? Let Us Know