The SWIFT RMB Tracker was launched in September 2011, with the aim of reporting monthly statistics of RMB flows in order to streamline the RMB’s progress towards becoming a fully liberalized international currency, that if free-floating, without an artificial central bank support/weakness.

Broken down into geographical regions, SWIFT reports the following figures:

SWIFT reports a 35% increase in the amount of institutions using the Chinese national currency for payments with China and Hong Kong. According to SWIFT, “More than one third of financial institutions around the world are now using the RMB.”

In a statement, Stephen Gilderdale, Head of New Business Development at SWIFT said, “It is encouraging to see that RMB usage by financial institutions and corporates is steadily growing. More financial institutions using the RMB will improve the utility of the currency in Hong Kong, China and other offshore centres. As the currency continues to grow, opportunities will arise leading to the development of new products and services denominated in RMB.”

The RMB now stands as the 7th ranked global payments currency, accounting for 1.64% of global payments, up from 1.57% in July. Slowly but surely does it.

RMB payments fell 6% in August 2014, which is “attributable to low seasonal payments activity,” according to SWIFT. 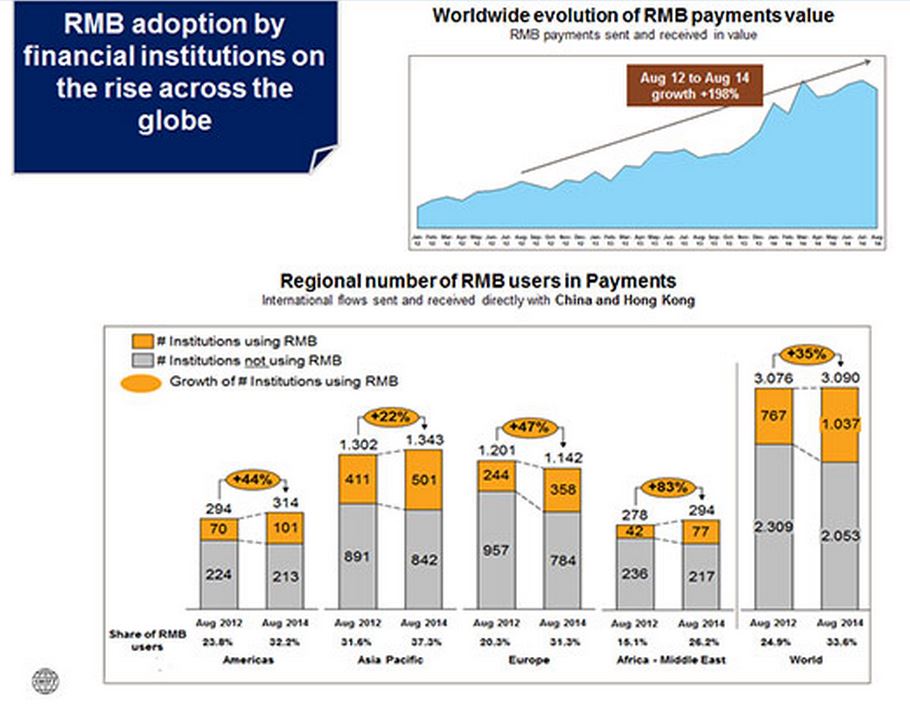 The Dragon Is Waking

China is the world’s 2nd largest economy as measured by gross domestic product (GDP), according to the most recent annual figures. China is also the world’s largest net exporter and 2nd largest net importer. Overall, China accounts for approximately 15% of total world trade. Other economic indicators such as foreign direct investment (FDI) are also mushrooming. China attracts over $100 billion in annual FDI flows from around the world and is currently the largest holder of FX reserves, with a total of USD$3.8 trillion, according to official annual figures for 2013.

The macro-statistics underline that foreign demand for RMB is growing and is likely to maintain that level of growth, as long as the Chinese economic juggernaut can maintain its multi-faceted progress. Property market bubbles and excessive price inflation on food in particular, are just two risks Chinese authorities are trying to mitigate in their bid to sustain blistering GDP growth when compared to the rest of the developed (and developing) world.

Over the not too distant future, it is expected that China will finally allow a full internationalization of the yuan and support its integration into the international monetary system alongside new clearing and settlement infrastructures being integrated. The big question is, how long will the People’s Bank of China (PBoC) and Chinese authorities wait?

The answer at this stage is unclear and is open to speculation. Economic developments and Chinese economic performance will almost certainly have interim effects and influence any schedule currently pencilled in by the PBoC.