Talk of a Grexit, multi-year lows for gold, and a wobbly Chinese equity market might be affecting the overall sentiment of traders, but don’t tell that to owners of shares of brokers. However, one stock hasn’t been so lucky. With shares of InteractiveBrokers and IG Markets at record highs, GAIN Capital (GCAP:NYSE) has slowly been creeping lower.

At a current $7.33 today, shares have fallen nearly 30% from their June highs. After prices shed a few percent along with the overall US stock market as it reacted to news from Greece at the end of June, shares of GAIN have continued to slide.

Currently putting pressure on shares was the release of record retail volume data from the broker on July 10th. Seemingly bullish, the results revealed that GAIN was having success at keeping customers from their newly acquired City Index active. The figures also allowed GAIN to surpass FXCM as the top non-Japanese retail forex broker by volume for Q2.

However, along with volume results, GAIN Capital’s CEO, Glenn Stevens stated, “Revenue capture during the quarter was challenging,” with him expecting the final figure to be “towards the lower end of the range of the last four quarters, which was $70 to $116 per million.” At the lower end of the range, Q2’s result will mark the second consecutive quarter of falling revenue capture. More worrisome for the broker is that based on estimates released by GAIN Capital during their Q1 conference call in May, the firm may be operating below their breakeven revenue capture figure in Q2.

During our analysis of GAIN’s Q1 results, we noted that Stevens blamed revenue capture on one-sided trading of their customers. As a result, this limited the natural crossing of trades between customers which is the lowest risk and most ideal for broker. 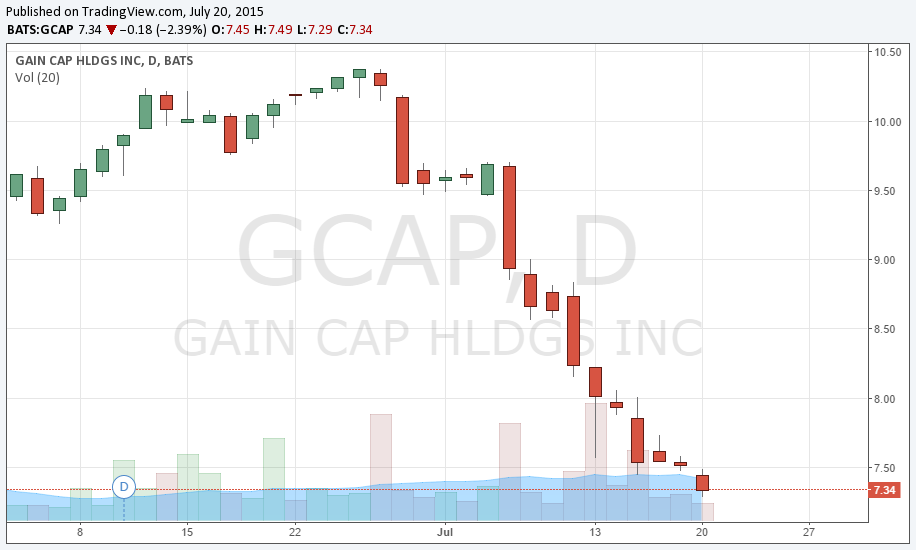 Interestingly, as noted in the chart above, the retreat in GAIN’s shares had already begun to heat up even before the July 10th revenue capture forecast. Prior to that event, the major catalyst of negative news were remarks from Jefferies that they had cut their price target on the stock, from $13 to $11 on July 7th. However, at the time, Jefferies maintained its ‘Buy’ rating, with the price cut appearing more in line with analysts adjusting their price target to reflect shares having already declined below $10.

So what happens next? In the current scenario shares fell prior to the news that GAIN may report a loss in Q2, and then continued their decline. This seems to indicate that there was a wave of ‘smart’ money selling that anticipated negative news from GAIN, either in terms of problems with their integration of City Index, or due to declining revenue capture. This may mean though that negative news is already being factored into shares of GAIN Capital. As a result, any signs of a turnaround when GAIN released their financials could trigger a rebound. Specifically, we will be following whether they make any statements about July, as if a rebound is to take place this month, we expect them to mention it. As such, if GAIN refrains from providing comments about July, it could be the canary in the mine that their revenue capture problems are continuing.