A few weeks ago I checked out the new version of FxStat, where I stated it was coming along pretty nicely. And although it was noted that it’s got a while to go before achieving the functionality of MyFXBook, it now appears as though they’re closing the gap, and fast.

Firstly, they’ve introduced probably the most important feature, which makes MyFxBlog stand out above the crowd, namely, the verification of trading accounts. So now, whenever someone claims a statement is from a live account, you know it’s from a live account. Of course, MyFxBook has had this for quite some time, so it’s was only a natural progression for FXStat.

“Our new release is verification of the trading source (Real / Demo). To increase the trust between fxstat and its members/visitors, we have developed a verification label which allow traders to verify their trading source. Fxstat bridge will check traders MT4 and identify if the account is Real account or Demo.”

Another new feature they’ve introduced is the “Risk of Ruin” feature, whereby a trader can tell how much potential risk they’re delving into when following a trader. This feature will improve the user’s ability to evaluate performance through the use of probabilities. The probabilities will provide users with an indication of the chances of loss in their account. In the example, the chance of losing 10% of the account is 24.23%.

They have also introduced a filter option. Actually, this feature was quite overdue, but it’s here now, and it’s pretty simple and neat. One can easily adjust the profit, drawdown, age of account, etc… and check out what’s hot. 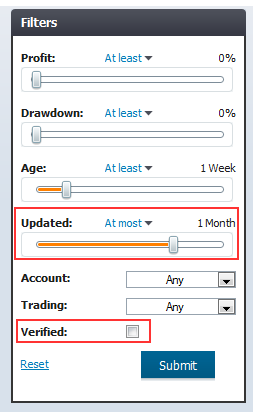 Also, you can now also discuss with other members about the trades and what you think of them. So if a trader is promoting is figures, one can ask him till the cows come home about which brokers, which pairs, etc…

And finally, (and this is something MyFXBook hasn’t yet fully implemented), FxStat now allows readers of languages other than English to browse through the website without getting confused, although I’m sure everyone knows how to read an equity curve… At any point throughout any page on fxstat, the user should simply click on translation mode to start translating. When translation mode is activated, any section that requires translation will be highlighted. Selection of a particular word or sentence will allow users to either enter the translation or vote for previous translations.  If you notice, MyFXBook only have a few European languages, whereas FXStat has more variety. I don’t think this is a killer feature, but it’s nice to have.

Overall, FXStat is basically becoming a clone of MyFXBook, and I’m not too sure I would be using both sites if they offer exactly the same features. However, competition is always good (unless you’re the monopolizer), so we welcome FxStats unradical “innovations”.