London Stock Exchange listed publicly traded brokerage Plus500 Ltd (LON:PLUS), issued its latest trading update detailing the company’s performance during the third quarter of 2014. The company reports that revenues during Q3 increased by 23.5% to $56.2 million, when compared to the second quarter, while for the first 9 months of the year the firm’s revenues totaled $162.4 million, which is 151% higher than a year ago.

The number of new customers acquired by Plus500 Ltd (LON:PLUS) during the quarter has grown to 14,850 which is higher by 17% when compared to the same quarter of last year and to the second quarter of this year.

Most importantly the company reports that its user acquisition costs remained flat in Q3 totaling $1,005 per client, while the average revenue per user has grown by 10% to $1,290. According to the announcement, “The Company is committed to maintaining its marketing spend and also creating a bespoke campaign to attract a greater number of higher value customers.” 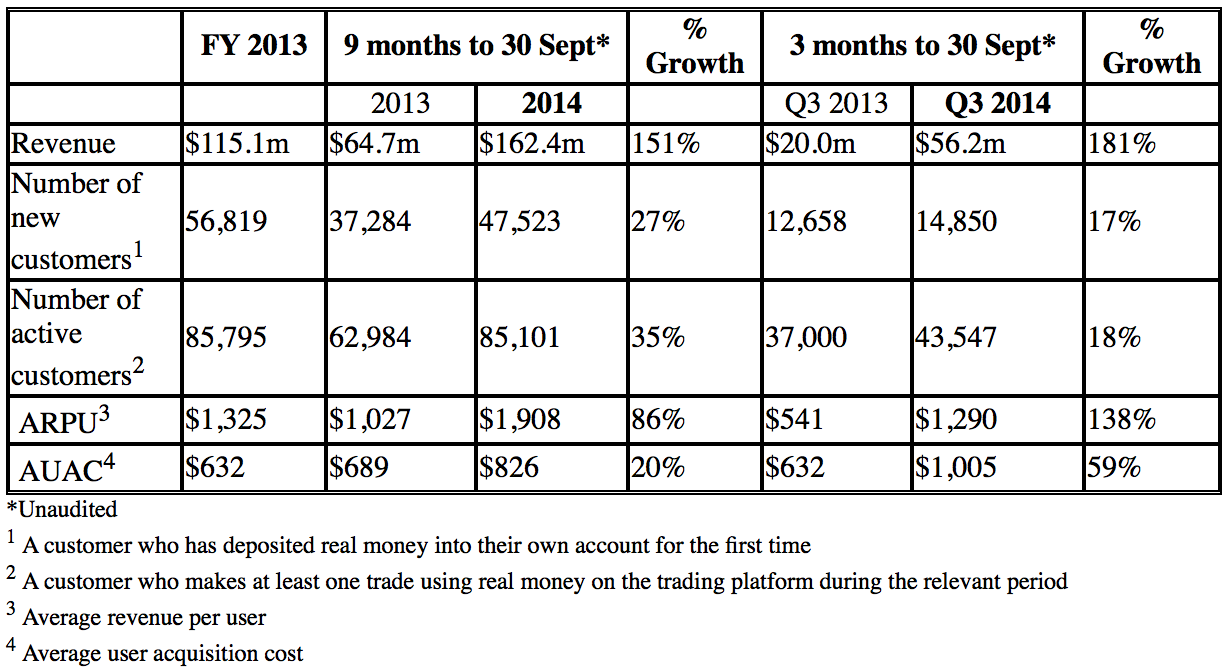 The numbers confirm a hypothesis which Forex Magnates expressed when analyzing the company’s interim management statement for the second quarter of this year – the broker appears to have started to target more expensive but higher-end customers.

Throughout the third quarter of 2014, 94% of total revenue was brought in from regulated markets, with the remainder from countries where the company operates under a legal opinion.

According to the company announcement, during the first nine months to September 30, 2014, Plus500 Ltd (LON:PLUS) added 300 new instruments and reduced some very popular trading instruments spreads to more competitive levels. The FTSE100 index is now traded with a 0.88 pips spread, the GBP/USD and EUR/USD forex pairs with 1 pip and oil with 3 pips. The same spreads are offered to the entire customer base.

Plus500 Ltd (LON:PLUS) is expecting to exceed current market expectations for both revenue and profit for the year ending December 31, 2014.

The company’s CEO, Gal Haber, said, “We are very happy to report another quarter of significant growth where we almost trebled our revenues and more than doubled our ARPU compared with last year, as we saw an increase in market activity globally.”

“Looking ahead, we entered Q4 with increased momentum as the initiatives we introduced in the previous quarter continue to bear fruit. Our intuitive marketing technology continues to attract and retain higher value customers, which gives us the confidence of exceeding market expectations for the full year 2014,” he concluded.

Share this article
Tags: brokers / plus500
Got a news tip? Let Us Know