Over the past decade, the foreign exchange (forex) industry has been picking up speed in terms of development and popularity in Arab countries. This is evident, in particular, in the Cooperation Council for the Arab States of the Gulf, previously known as the Gulf Cooperation Council (GCC).

The GCC is a regional intergovernmental political and economic union. It is made up of all Arab states of the Persian Gulf, except for Iraq. Specifically, these countries are Bahrain, Kuwait, Oman, Qatar, Saudi Arabia and the United Arab Emirates (UAE).

The countries within the GCC have huge oil fortunes, however, their approach to forex trading and the maturity of the industry varies. In general, forex does not have widespread recognition as an asset class, as the financial markets are still largely focused on traditional assets. Even derivatives, such as options and futures, are in the early stages.

However, as Finance Magnates previously analyzed, the Middle East and more specifically, the GCC region, is at a turning point. This is because the countries within this region are wanting to diversify their economies away from oil, resulting in an uptick in retail trading. 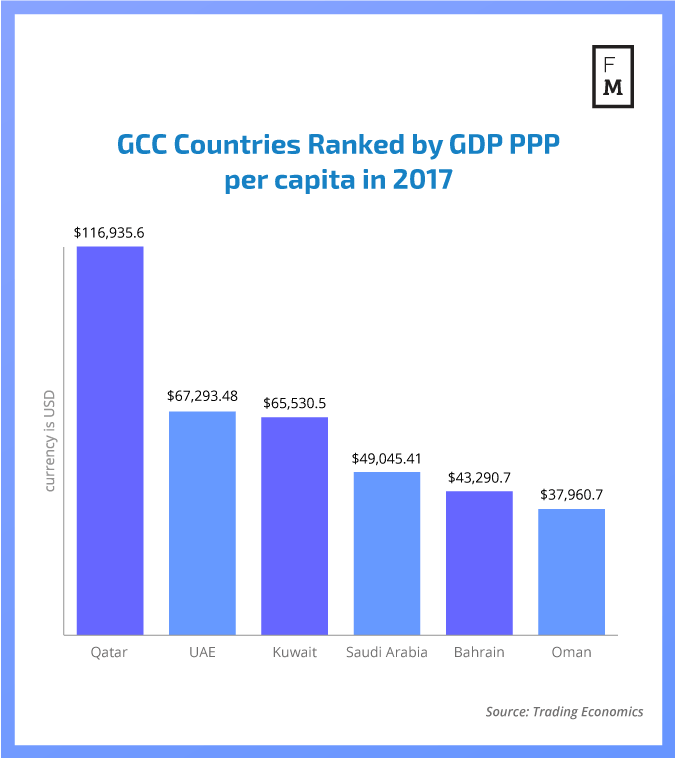 In terms of GDP per capita, when adjusted by purchasing power parity, Qatar ranks the highest out of all GCC countries. However, in terms of GDP, the two countries which dominate the region are Saudi Arabia and the UAE, which also have the two most mature FX industries. These two markets, which are growing at a steady rate, give a glimpse into the future of the region and how it is evolving.

History of FX in the GCC Region

In this region, the FX industry was first introduced in the 1990s, kicking off first in Kuwait, before spreading to other GCC countries. However, regulation was slow to follow.

In 2008, following the global crisis, financial regulators within the region started to implement stricter regulations and began to crack down on unregulated entities.

Now, particularly in countries such as the UAE, where the central bank and the Dubai International Financial Centre (DIFC) have taken on a larger role in enforcing strict international rules, the FX market is on its way to reaching the same level of maturity of that seen in Europe.

Dubai is quickly becoming a global regulatory hub for the industry. In recent years, big forex brokers have established themselves in Dubai. In addition, branches or representative offices of European and UK brokers have started appearing in greater numbers in the city, such as FXCM, Saxobank, Roboforex, Avatrade, ATFX, Hot Forex (HF Markets), among others.

Because there are local and international brokerages located in the region, specifically in Dubai, investors have a fair amount of trading providers to choose from when trading FX.

However, although the UAE and Saudi Arabia do have the two largest FX markets, the remaining countries should not be discounted.

As Mohammad Isbeer, the Global Head of Brokerage Sales at Equiti, outlined: “Kuwait is a very important market for FX; the industry there is mature and demand for FX by Kuwaitis is solid. Oman is a big untapped market, but the lack of relevant regulation is an obstacle in the way of a lot of brokers who tried to penetrate the market over there.”

Isbeer will be on the Gold and Glitter: Understanding Today’s Middle East Markets panel at the upcoming iFX Expo in Cyprus, which will be held in May. On the panel, members will discuss the current opportunities, unique regional factors, and potential in the Middle East and North Africa (MENA) region.

The biggest question that needs to be asked is if there is demand for the asset class in the region? Taking a look at the average deposits made by investors in October and November of 2018 when trading forex, you can get a glimpse into the size of trading within the region. 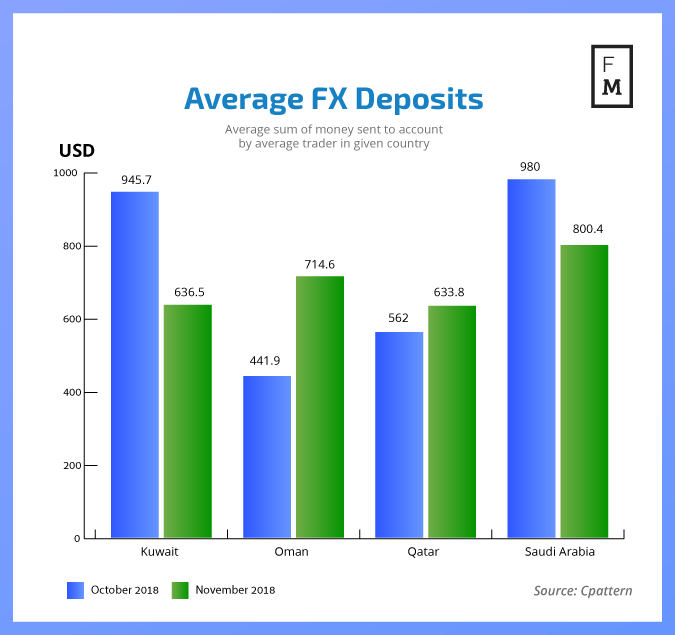 Marcelo Spina, Global Head of Partnerships at FXTM told Finance Magnates that demand in the region is steadily growing: “The GCC is gradually becoming an influential participant in global financial markets, and we have seen an equally increased appetite towards wanting to understand and learn more about the FX markets.

“While the United Arab Emirates has steadily made progress towards becoming the financial hub of the region, interest in trading and investments has also picked up in popularity across the GCC. We do expect that this trend of popularity will continue to increase.”

For FX trading, major currency pairs are the preferred choice, with a particular focus on the EUR/USD pair. However, GBP/USD, USD/JPY and GBP/JPY also attract a lot of attention from investors in the region. Spot FX trading is also popular within the region, as well as gold and oil.

Speaking to Finance Magnates about trading characteristics, Ali Hassan, the Vice President of Business Development at Q8 Trade, a broker based in Kuwait, highlighted: “The majority of individual participants in the region are focused on fast-pace trading more than long-term trading. They are more focused on the adrenaline rush they get from such trade.”

Is the Future of FX Bright in GCC Countries?

Although in some GCC countries, the FX industry is still in the early stages of development, the growth of the sector is picking up speed. A more uniform approach to regulation, increased liquidity, and developing economies are all contributors to the growth of this industry.

“The FX market will continue its gradual progression as we move forward into 2020 and beyond. Institutions have traditionally held an involvement in the FX market, but with global trends and other developments impacting financial markets every day, people will naturally be more and more attuned to how FX rates can affect their daily lives,” Spina noted. He also highlighted the importance of educating yourself on FX before investing.

“The GCC was, and will continue to be, one of the most attractive regions for FX; it is not far behind what is happening in Europe and Australia. The potential for FX in the region was somewhat hindered by the scams that touched the industry and gave it a bad reputation in the last 20 years,” outlined Isbeer.

“The existing, and evolving, regulation we are seeing now across the region is remedying that as clients become better informed about the industry and the importance of regulation. I see a healthy progression towards taking our industry to the next level in the promising GCC market,” he concluded.

With the FX market growing, how easy is it for a broker to become regulated? That answer depends on which country you want to operate in, but in general, the answer is that it can be challenging because the region is still developing a comprehensive understanding of what FX platform providers offer to their clients.

The UAE, which has the most developed FX industry out of GCC countries, also has the most streamlined regulatory process for companies trying to establish themselves within this space. Brokerages can apply for a license with the Dubai Financial Services Authority (DFSA). However, obtaining a license can take from six months up to a year.