While ESMA has certainly had a significant impact on brokers, online affiliates have been majorly affected too. And considering that recently some affiliate websites within the FX segment have been sold for seven digits, the importance of affiliates cannot be underestimated. Hence,  I decided to examine what online performance marketers have to say about the impact of ESMA on their business.

Let’s have a quick word of introduction and meet the affiliates we talked to. All of them, however, wished to remain anonymous.

“I am running affiliate business within the financial segment for a while, and around 80 percent of my audience comes from the EU, mostly from the Czech Republic.”

“I am running forextradingbonus.com and I started my first FX site started some four and a half years ago. While I do get a fair share of the EU traffic (some 35%), the main European market for me is the UK.”

“I run topbrokers.com/ and my share of EU traffic is anywhere between 25 percent and 40 percent. The major countries are the UK, France, and Germany.”

“I heavily focus on the EU traffic and currently, the share of it is around 70 percent for me. I’d rather not disclose my main countries.”

“I am running www.topratedforexbrokers.com as well as a few more sites within the FX segment. EU traffic accounts for less than 25 percent for me, and mainly consists of the UK, Germany, and Italy. Now let’s go ahead with the questions to see what kind of impact ESMA had for the online affiliate business.” 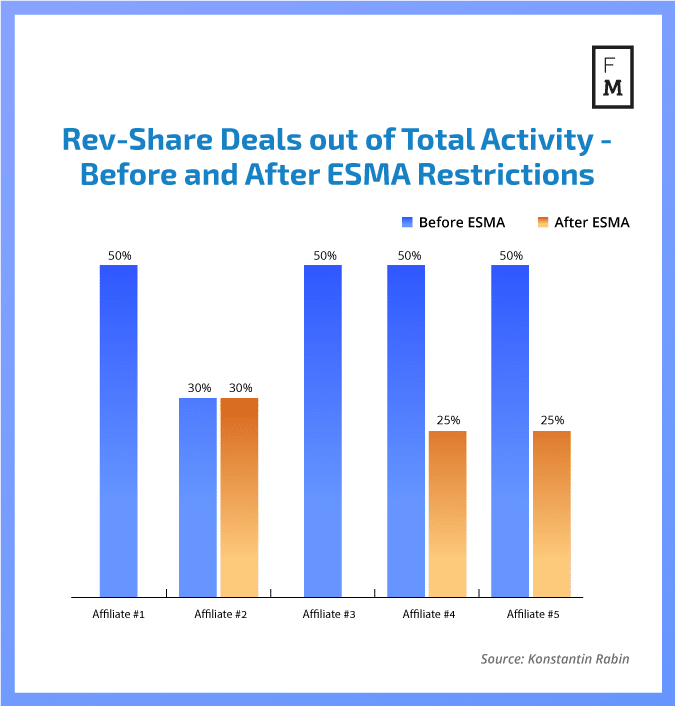 As you see from the chart above, two out of five affiliates stopped working via revenue share deals completely. For the other two, the percentage of revenue share deals dropped from 50 percent to 25 percent. However, Affiliate #2 hasn’t felt the impact of ESMA in this sense.

After switching some (or all) of the affiliate programs to CPA mode, did your income go up or down? 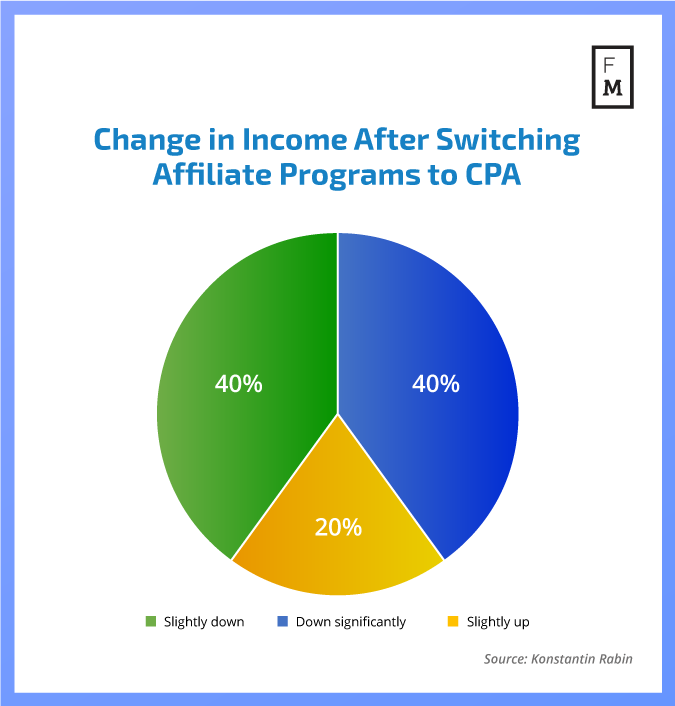 How about ESMA’s restriction on the leverage, did it have a negative influence on the percentage of qualified FTDs under CPA? 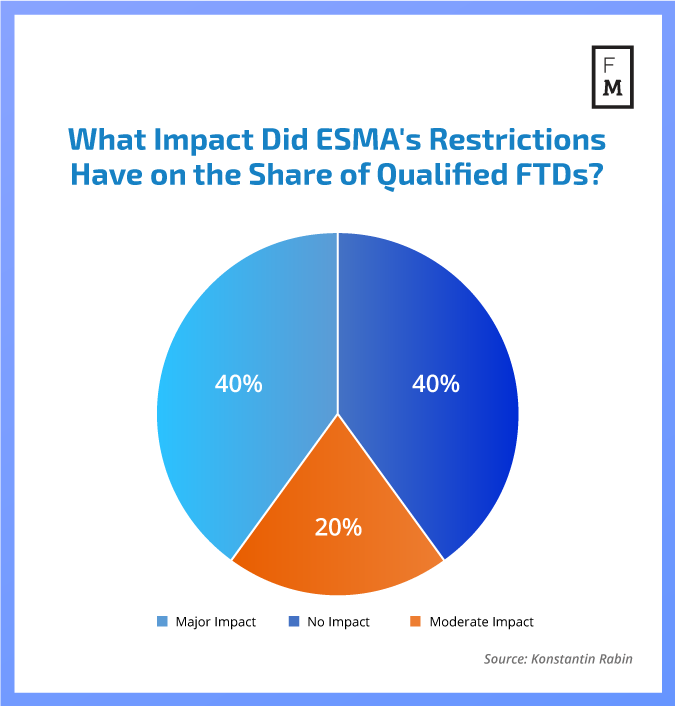 While it is clear that lower leverage would decrease the trade-size, it does seem that the total trading volume is shrinking too as three out of five affiliates got fewer depositors that qualify for a CPA payment.

Did you have to abandon any affiliate programs after ESMA? (e.g. the broker couldn’t switch to CPA on time)? 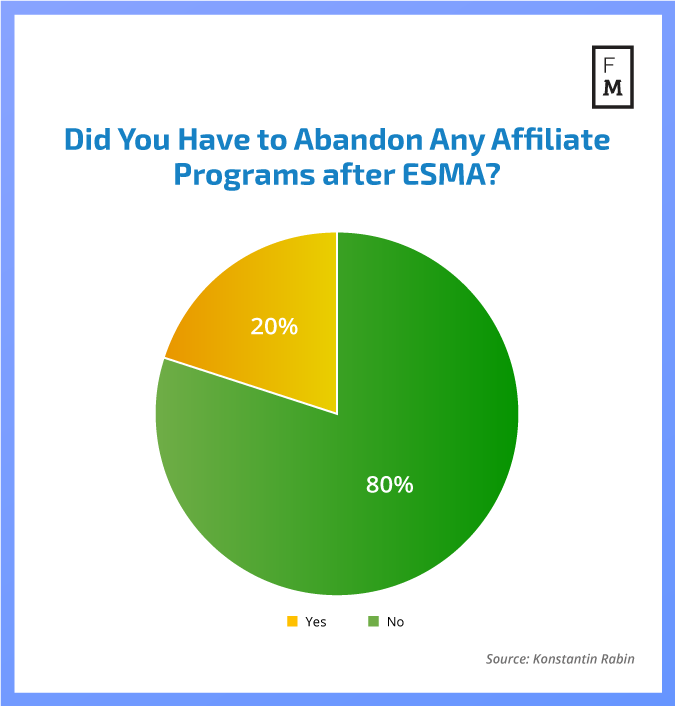 It also seems that not every broker was able to get started with an effective (or any?) CPA scheme for EU traders, which is why one affiliate had to actually abandon an affiliate program.

As for the future, are you planning to further invest in the websites that target EU traders? 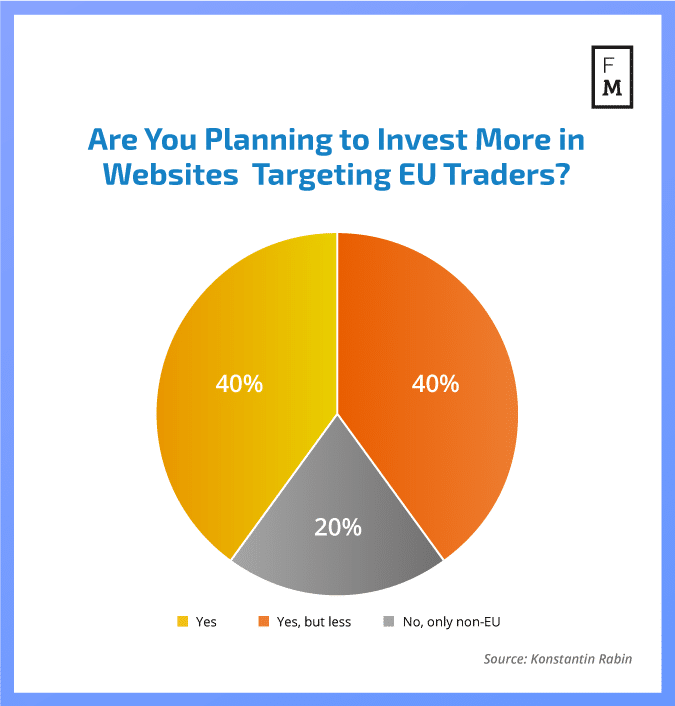 While it is clear that EU regulations are only getting tougher and tougher, the market still remains interesting and, obviously, profitable for the affiliates. Only one affiliate decided to stop investing in websites that target EU traders, and two affiliates are planning to invest at least as much as they used to.

What is the estimated loss of ESMA updates to your FX business?

All of the affiliates estimated their loss anywhere between 10 percent and 30 percent, both including and excluding the ban on binary options.

Are you Pro or Against ESMA policies? Why?

“Somehow pro, somehow against. Bonuses (aka trading benefits) were a good thing. I do not understand why other financial companies (e.g. banks) can allow various benefits to their clients, but brokers can’t. New limits on the leverage – it is certainly a good update for the newcomers, yet it can also drive people away from the regulated brokers. And the binary prohibition – definitely good as it was the “cancer” of the industry.”

“I am Pro ESMA policies. I like the idea of the “risk warning” requirement. Even if the income gets lower because of it. I think it’s an evolutionary step for the industry and the traders should certainly be aware of the risks.”

“I am strongly against ESMA. Why should EU bureaucrats restrict people’s right to trade with more risk involved?”

“I’m extremely in favor of heavy regulation. The Forex industry can be like the Wild West at times. Currently most Forex brokers are set up very similarly to online bookmakers. They have an edge on every trade and very few traders make money, especially those who trade long term. For any industry to have longevity, it needs to offer transparency on how it works and to put the customer first. The ESMA regulations are a step in the right direction for that.”

It is clear that the new ESMA policies had a negative impact on the affiliates, well at least in terms of earnings. Considering that affiliates are less likely to generate income through revenue share models and are mostly profiting from the CPA deals, it seems that the restrictions on the leverage majorly contributed to the decline in earnings – as simply fewer traders are likely to qualify for the CPA payment. Also, it seems that some of the brokers are losing affiliates too, as they were simply not able to switch their partner compensation schemes on time or simply weren’t able to make them attractive.

Having said this, it is still great to see affiliates being mostly pro-ESMA (even though the updates decreased their income by some 10%-30%) as they do see the importance in warning their website visitors about the potential risks as well as they understand the importance of having longevity.

Konstantin Rabin is the CEO of Finance Makers – a digital marketing and content creation firm for the financial services industry.