Quite surprisingly, it turns out that almost a third of forex traders have either invested in an ICO or are planning to do so in the future. The survey, aimed at gauging the trust in this new combination of crowdfunding and cryptocurrency, had almost 700 respondents.

The most interesting finding was that 19% of the respondents have already hopped on the bandwagon and invested in an ICO. Some 8.5% stated that they are interested in doing so in the future and are looking for an ICO to suit them.

Almost a quarter of the respondents (23.5%) stated that they haven’t invested yet but may do in the future.

On the other hand, almost half of the participants (49%) responded that they “don’t trust ICOs”. 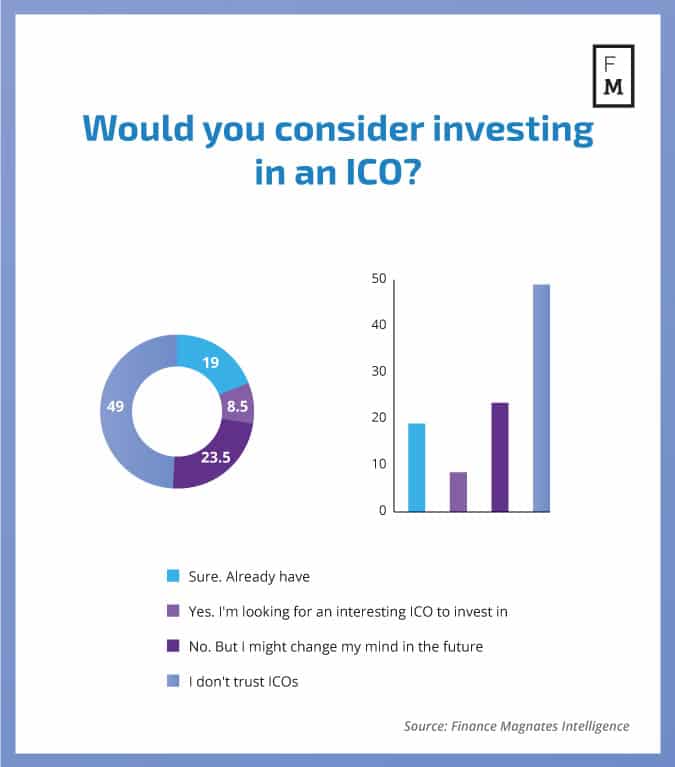 ICOs are a relatively new financial tool, existent on the mainstream level for less than a year. But over the last two months they have become ubiquitous. The ICO hype is a fact, and every day we are seeing more and more enterprises offering us distributed this and decentralized that.

Brokers and institutional players who were cautious and even suspicious with respect to cryptocurrencies only a few months ago, are now speaking the crypto-lingo fluently.

That is why we wanted to take a look at this phenomenon from the customer’s point of view. We were interested to see what the average retail forex trader thinks about ICOs. On the one hand, you might expect this group to be quite open minded when it comes to investment channels. On the other hand, traders who build their strategy on the volatility of currencies might be reluctant to invest in a long-term asset that could take a while to mature.

Given the findings of the survey and the growth in the number of ICOs and the amount of money they raise, we may expect to see trust in this tool to rise.

Very good and useful research, i think the traits of the fx trading community put them in an interesting mindset where they are keen to ‘seize the opportunities’