The Apple Watch is out, and with it are plenty of financial apps in production or out there. So you may be asking: do I really need this watch? Does it provide any value if I’m already tugging around my smartphone with me? $350!!! Come on, that’s crazy, and it doesn’t even have GPS to let me go jogging without an iPhone. And last but not least, everybody’s favorite question, “does it tell time?”

With that intro out of the way, the real question that should be asked – just how many of these watches will Apple be selling this year? Sales estimates are varied for the Apple Watch, but they all point to the product doing VERY WELL this year. Following strong pre-ordering, Daniel Ives, an analyst at FBR Capital Markets raised his estimates to 20 million sales for 2015.

For a perspective on just how large the expected market is, Apple is believed to have sold nearly 1 million watches in the first DAY is was available for pre-sale. That is more watches in one day than smartwatches sold using Google Wear in an entire YEAR for 2014. So the Apple Watch is kind of a big thing, even if most people will never buy one.

For app developers, the Apple Watch provides to a potential audience of 20 million users. This new market though comes with challenges as firms discover what works best for Apple Watch users. As the product launches, already on the market are dozens of apps customized for the watch (A great list was published on Benzinga). Some, such as E*Trade, are using the watch as an extension of the iPhone app to offer customers portfolio snapshots and price notifications. IG Markets and others have created features which actually initiate trades from the watch. Overall, dozens of financial apps were already developed for the product before it even arrived on it first customer wrist.

But which of these apps will ultimately prove to be a winner and properly provide value to users on the small, but readily available screen? 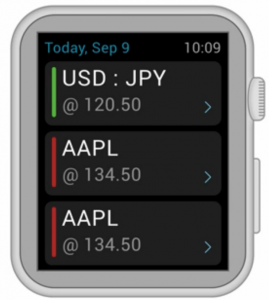 According to Daniel Chia, Co-Founder of Call Levels, the company that created an Apple Watch based app of a simple to use trading price alert system, the winners will be those that are properly providing push notification on the watch to add value to users. Chia explained to Finance Magnates that, “Watch based apps are for users who are on the move, who are actively out in the gym, at meetings or at work. Having real lives, they are only able to surreptitiously glance at their phones once in a while. A wearable like the Apple Watch will help distill the best part of a push notification list by allowing their users to quickly check updates that are relevant to them at a glance. Users can then decide to ignore the update or follow up on the notification by opening their phones if it’s important to them.”

Therefore, the challenge comes is ensuring that notifications aren’t only in real time, but limited to important information that they can easily glance and see. As an example, Chia noted their trading alert product requires users to enter prices of stocks and other assets, with alerts sent when prices reach the predefined levels. This model thereby limits notifications that have already been desired by the user.

Another challenge is the smaller screen. Speaking to Finance Magnates, Colby Foster, of Carlisle and Gallagher Consulting Group, explained that “development for the Apple Watch is similar to the iPhone and uses the same programming language”, but that developers need to adjust their apps to the smaller screen. He added that this could be an advantage, as apps are customized to only show what the user needs in real time. This contrasts with larger screens where data can get cluttered when apps are showing too much information.

Beyond being able to add value by offering informative notifications, the Apple Watch provides developers the ability to leverage the ‘wearable’ functions of the watch that include the fitness tracker and health monitor. Collaborating with Sean and Brock Wright of Perficient, Foster was part of a group called Vortex that created CitiFit for the Citi Mobile Challenge. The app combines Citibank’s existing banking app and user points system with fitness, and account holders being incentivized based on exercising.

In the demo, Vortex explained that while a person may check their banking app 2 or 3 times a week, fitness users check their stats and achievements much more often. Therefore, CitiFit showed how there is an opportunity for app developers to increase user engagement for their products by leveraging the added wearable features not available on the phone.