At $7, shares of LendingClub have been a massive underperformer since the company went public in December 2014. Priced at $15, shares opened well above $20 but have since trended down. Affecting performance is an increasingly competitive market of online lenders and worries that higher US interest rates will slow down loan originations.

Taking shares lower was a report from Bloomberg about an increase in LendingClub’s non-performing loans. The report was based on loan performance analysis made public by LC Advisors, a subsidiary of LendingClub.

Responding to the Bloomberg report, which subsequently was further covered by ZeroHedge, LendingClub has published a new filing where they believe the presentation from LC Advisors was misinterpreted.

As seen in the image above, LendingClub presented that for 36 month loans, two segments were experiencing charge-offs that were worse than expected (8.3% of all loans), while 60 month loans had one underperforming segment (9.3% of all loans). Providing additional information, LendingClub announced today that in fact both 36 and 60 month loans were performing as forecasted (larger blue circle), with the underperforming segments included in the overall portfolio.

Along with the explanation, LendingClub also republished their actual loss curves of loan vintages. According to LendingClub, as seen in the chart below for 36 month loans, loss performance of loans from 2014 and 2015 are so far performing better than those from 2009, 2010 and 2012.

As seen below, the figures represent that LendingClub is taking into account an expected charge off rate of up to 8% loss on loans for 36 month loans. During a presentation at the Credit Suisse Technology, Media & Telecom Conference, LendingClub CEO Renaud Laplanche said that investors are seeing gross yields of around 12%. Therefore, after assuming LendingClub’s fees and annualizing the expected 7-8% loan charge offs, annual net returns are expected to be at the 8-9% level. As such, according to Laplanche, even were charge off percentages to potentially triple forecasts, he stated investors could still be in the black.

(Correction: An earlier draft incorrectly stated that an 8% charge off rate would yield 4% net returns) 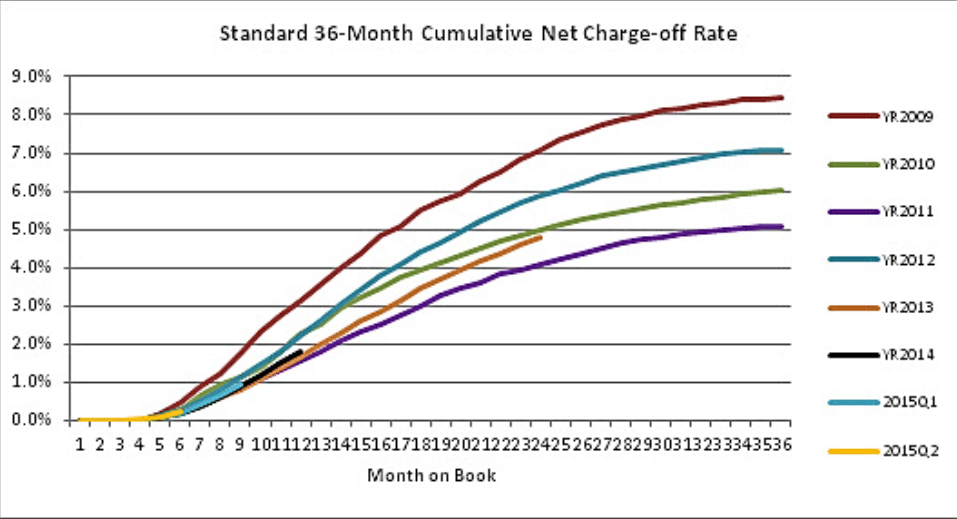 Share this article
Tags: Marketplace Lending
Got a news tip? Let Us Know

You make a common mistake in this article. You mentioned Lending Club’s total charge-off rate of 8% and then go on to say with an average interest rate of 12% this equates to a 4% return. This is wrong.

The 8% charge-off rate you quote is over the life of a 36-month loan, so clearly it is not annual. Given these are fully amortizing loans (investors receive some principal back every month along with interest) the annual loss rate is more like 4% leaving an 8% average return.

@Peter and others who messaged me directly- thanks for pointing out the error in my math which I have amended.